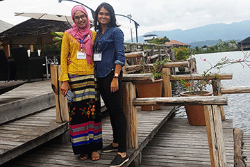 
SUNY Cortland hosted two women activists from Myanmar on Thursday, Sept. 5, for a day of conversations about the collision of faith, feminism and ethnicity in their country, which is struggling with longstanding inequality among various groups of people.

Thet Su Htwe, M.D., a Muslim doctor who runs sexuality education programs that go against conservative cultural norms, and Kyaw Thein, a member of Myanmar’s oppressed Rohingya minority who faced discrimination in the male-dominated field of civil engineering, met with the campus community during several events throughout the day.

Two of the events were open to the public, who were invited to attend free of charge.

“Being Muslim and Female in Myanmar: Two Perspectives,” was presented by Htwe and Thein as a sandwich seminar from noon to 1 p.m. in Brockway Hall Jacobus Lounge.

“Education in Myanmar and the Challenges of Diversity” featured Htwe and Thein in a panel discussion from 4:30 to 6 p.m. in Sperry Center, Room 104. Moderated by Jeremy Jimenez, a Cortland assistant professor of foundations and social advocacy, the panel also included Thamora Fishel, associate director of Cornell University’s Southeast Asia Program; Rhoda Linton, a longtime advocate for women’s education and empowerment in Burma; and Cornell University doctoral students.

Through those and several more intimate campus conversations, Htwe and Thein engaged audiences in discussions about being feminist and Muslim in a place where cultural traditions, Buddhist nationalism, ethnic inequality and conflict, and the military’s long-standing grip on power continues to shape gender relations as well as access to education and employment.

“I’m thrilled to be able to work with Cornell and Cortland colleagues to bring these important conversations to our community and, especially, our students,” said organizer Jena Nicols Curtis, newly appointed director of SUNY Cortland’s Center for Gender and Intercultural Studies.

“It’s essential that our teacher candidates understand both the complexity and richness that intersectionality brings to the classroom,” she said.

Myanmar, also known as Burma, is one of Asia’s most diverse nations with more than 100 different languages spoken and a huge range of cross-cutting ethnic and religious identities and communities. Since gaining independence at the end of World War II, education has been used as a tool for building national unity, but it has also served as a flashpoint for the many groups seeking autonomy and self-determination. The education system also powerfully reflects the way faith, feminism, ethnicity, national inclusion and exclusion are being discussed in Myanmar.

This panel discussed the religious and colonial foundations of the education system in Myanmar and share how race, gender and religion shape teaching and students’ experiences of learning in contemporary Myanmar.

Htwe is the founder of Strong Flowers Sexuality Education Services, an independent social enterprise dedicated to educating people about sexual health — a topic that is still considered taboo in many segments of Myanmar society. She began her activism in 2015 after connecting with the Whistle for Help Campaign to stop sexual harassment on public buses. Armed with her medical license, she joined Metta Development Foundation, a local non-governmental organization that runs a project called “Women’s Voices,” which involves talking with women and men about sexuality, primarily in rural areas throughout the country.

Thein began to develop consciousness of oppression and discrimination as a woman when she tried to find a job in her field. In 2015, with her black belt in karate, she joined the Myanmar Women’s Self Defense Center, a woman-owned business that implements its own woman-focused self-defense training program in Yangon. Awakened by recent events affecting Rohingya people — including violent military campaigns that killed more than 20,000 Rohingyas and forced more than 600,000 out of the country — Thein has been studying her own generations of family history in Myanmar to counteract the misinformation she was taught in school.

The visit was organized through a partnership between the university’s School of Education and its Center for Gender and Intercultural Studies, as well as Cornell University’s Southeast Asia Program. Thursday’s program also is supported by Cortland’s President’s Office with partial funding obtained by Cornell from a Title VI NRC grant from the U.S. Department of Education.