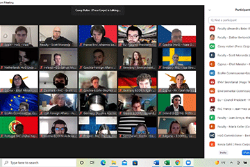 
The country of Austria’s official coat of arms depicts a fierce black eagle. But for three days last month, it was represented by Red Dragons.

The annual hands-on experiment in governmental negotiation and diplomacy, which traditionally has involved participants traveling to either New York City or Brussels, was held virtually for a second year due to the COVID-19 pandemic.

Nevertheless, the SUNY Cortland contingent thrived and captured accolades after the simulation concluded.

“I’m actually looking forward to getting my master’s in diplomacy,” said Binjakaj, an international student who during 2020-21 academic year served as vice president of SUNY Cortland’s Student Government Association.

“I think it’s definitely one of my main skills, my main areas. I’m definitely a very cold-blooded person, meaning in the Albanian sense that I’m actually a very calm and collected person. I’m very diplomatic. I very much value collaboration, talks and bargaining. I really don’t like conflict.”

Born in Italy and raised in Albania, at SUNY Cortland Binjakaj was inspired by this experience to add political science as a dual major with business economics, and will graduate next spring with a minor in computer applications and concentration in financial management.

“I want to increase the participation of students in other majors,” he said. “Obviously it’s particularly oriented for students in International Studies. But I don’t see why a student who’s majoring in business economics or political science or even someone working on environmental studies cannot do this. Because we have all those four committees, and the European Commission and the EU is a body that pretty much takes experts from all fields.”

Toribio, a senior international studies and political science major from Freeport, N.Y., has four Global MEU simulations under her belt; New York City in 2019, Brussels in 2020 and online the past two cycles.

“Working remotely the last two years is definitely a different experience, but academically I think over the four years it’s consistently the same: you learn something new,” she said.

“Being the foreign affairs minister for Austria was a different role than what I’ve done in the past,” she said. “All four years I’ve actually had different roles.

“Although you learn more on European politics, one of the plusses of this conference is you really get to dive deep into one country in particular,” Toribio said. “For example, I really had no idea Austria was going through so many political changes. It was just a real learning experience for me.”

The class project has inspired her to seek her dual citizenship from the Dominican Republic and a future job in its embassy. Meanwhile, she will pursue graduate studies in public policy.

“The Model European Union shaped my decision to add political science as a major a year ago,” Toribio said. “It made me realize I could do so much more.”

For one, Austria has had two new chancellor’s within two months due to Chancellor Kurz’ resignation in October 2021.

“I would usually think ‘What would the chancellor say on this matter?,’ but when there are three different chancellors in such a short amount of time, it is definitely harder to tell,” she said.

For another, during her Head of Government chat room discussions about the Russia-Ukraine conflict, she needed to consider that some European Union countries, including Austria, aren’t part of NATO, which would have a say in the dispute from a military standpoint.

“My main focus for this matter was to keep the neutrality status Austria would enact, but there were a few times where it was tough to stay neutral,” Alvisi said.

Alvisi, who currently is serving SUNY Cortland’s Student Government Association as the 2021-22 chief financial officer, is weighing her next steps for when she graduates in May: the pursuit of joint degrees relating to public administration and international relations, the possibility of an internship with the Brussels School of Government or continuing to explore a U.S. Foreign Service career.

“Throughout the fall semester and over winter break, I guided the students in their preparations and research for the conference,” said Moranda, who, in addition to serving as acting director of the Clark Center, coordinates Cortland’s Project on Eastern and Central Europe (PECE).

“I was incredibly impressed with the commitment and industriousness of the student participants in a virtual conference held during their winter break. I was very proud of their articulate and well-researched participation in the conference negotiations and debates.”

The Global MEU 2022 co-directors were Juan Arroyo from Ithaca College and Giulia Tercovich of the Brussels School of Governance; with help from Michelle Benson-Saxton and Collin Anderson at University at Buffalo, Alexandru Balas at SUNY Cortland and Zakhar Berkovich at SUNY Albany.