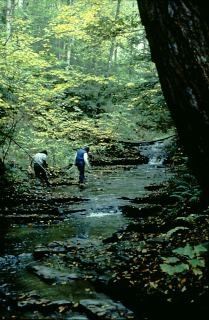 An historical analysis of Hoxie Gorge reveals that it, along with much of Cortland County, remained Indian Territory until after the Revolutionary War.

Following the war, this land was designated as Lot Ten on the Military Tract. The Military Tract was an area of more than one and one-half million acres set aside by the state legislature to compensate Revolutionary War veterans for their wartime services.

The lot was awarded to William Gilchrist; however, no use for the land is documented until 1876 when structures belonging to J. Dodd and H. McCumber appear on an early map.

The United States Geological Survey maps indicate the presence of several structures on the property in the 1903, 1944 and 1955 editions.

A succession of families farmed the land from the 1880's onward. An interpretation of the landscape today suggests that wheat, oats, hay and potatoes were grown. Abundant hay crops and timothy pastures proved suitable for dairy farming and this was, most likely, the major focus of the farm.

When the land was acquired for use by the College in 1965, it consisted of three separate parcels of land with a total of 169 acres. The largest parcel of land, approximately 111 acres, was purchased from Clarence A. Robertson.

The second parcel, consisting of nearly 52 acres, was purchased from S. Benjamin Sprouse; and, the final parcel of approximately six acres was purchased from Harry Hicks. Altogether, the investment, including lawyers' fees, was $7,605.

After the College acquired Hoxie Gorge, the 10 to 12 farm buildings that existed were torn down and sold for barnwood. They were, in fact, an "attractive nuisance" and invited vandalism, thus the reason for their demise. Today, the only structures on the property include an old tool shed, one privy and an Adirondack style lean-to.

Foundation remnants and other evidence indicating that the property was, at one time, a functioning farm operation, remain scattered throughout the property. These areas include building and barn foundations, old dumps, a maple-sugaring area, an old road running adjacent to the creek bed in the southeastern section of the property and remnants of old bridges that crossed the creek in various locations. 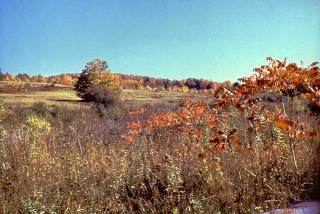 Hoxie Gorge is located in Cortland County of Central New York and is situated in the southern New York section of the Appalachian Plateau province.

The plateaus in New York have broad undulating summits and relatively steep-sided slopes. The plateaus of Central New York were extensively glaciated during the last two million years.

The glaciation left a thin covering of till draped over the plateau. This till is composed of silty clay having varying amounts of sand, gravel, and boulders and ranges from two to 20 feet in thickness.

First, Hoxie Gorge, for example, is oriented northwest-southeast, while the Tioughnioga River flows to the southeast. This creates a pattern known as barbed tributaries, a situation suggesting that the master stream, the Tioughnioga River, reversed direction sometime since its course was established.

The Silurian and Devonian history of the region is recorded in the rocks underlying the area. These periods represent tens of millions of years and occurred several hundred million years ago. The rocks of the area grade from coarser materials in the east to finer in the west.

There is also a transition from fine sediments at the beginning of Middle Devonian deposition through coarser and coarser sands of Late Devonian, and likewise, from marine to deltaic deposition. These observations have a definite relationship to the building of the ancestral Appalachian Mountain system.

The rocks found at Hoxie Gorge belong to the Geneseo Formation of the Upper Devonian Series. The rocks are shales but became coarser in texture as time progressed and the younger Sherburne and Ithaca formations were deposited.

They all contain marine fossils as well as increasing quantities of land plants. Moreover, there is abundant evidence of these sediments having been deposited as a delta.

The position of the actual gorge at Hoxie Gorge on the landscape can and has often been explained by joint pattern known to exist in the area. Joints are fractures that are found regularly repeated in the bedrock. Because joints are weaknesses in the rock, streamflow is accentuated along joint traces at the surface.

The concentration of rain runoff has downcut along the joint set to be what we know as Hoxie Gorge today. But why do we find the gorge where it is and not 100 meters to the south or to the north? Rocks are not everywhere uniform and the stresses applied to form joints are dispersed according to the characteristics of the rock. Where the rocks are weaker, joints are likely to be closely spaced; thus, Hoxie Gorge is located where it is because the rocks are weaker there than elsewhere.

Fossils are not known to be in abundance in the rocks of Hoxie Gorge, not in numbers of individuals or in variety. Fossils have long fascinated everyone, from school children to senior citizens, and when we see them in the rocks, the foremost concern is what they are. The rocks at Hoxie Gorge contain mainly fragments of a whole animal or plant, making identification sometimes difficult, but increasing the challenge and excitement of interpretation of the rock's fossils.

Conspicuous in the rocks are crinoid stem sections. These are small, flat round segments of an animal which had a calcareous stalk with a rootlike base which acted as a holdfast in the sediments of the sea floor. The fleshy part of the animal was in a globular framework at the top of the stalk.

The stalk was made up of jointed parts that were easily separated. The circular single parts are most often found, but the stalk may sometimes be found lying lengthwise. Though the segments of the stalk are common, sometimes the body of the crinoid (or "head") is rare in this area.

Bryozoa appear like moss or a lace-work over the rock or over other fossils. They are groups of individuals forming a cup-like sac, cemented in a calcareous framework. The single openings may be minute and one must use a hand lens or microscope to observe the openings.

Brachiopods are single animals with two fitting parts of calcium carbonate or lime phosphate, hinged so that the parts may open and shut along the lower margin. Brachiopods are not common in the oceans today, but they were abundant in the Paleozoic seas, and the fossils are particularly common in this region.

Several kinds of fossils of mollusks may be found. The most common in this area are pelecypods, the clams, scallops, oysters, cockles, and mussels from the sea. They have hard calcareous shells of two parts. Gastropods, snails, are less common than the pelecypods (this writer has not found any gastropods in the rocks of Hoxie Gorge).

There are fossils of many groups of animals of which there are no living relatives. The above discussion of fossils was adapted from Illustrations of Fossils of the Ithaca Area by Katherine Palmer and Doris Brann (1966).