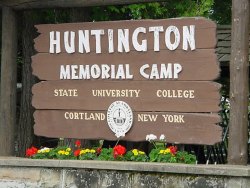 Camp Huntington is an outdoor and environmental education center located on Pine Knot Point along the shores of Raquette Lake. Originally built in the late 1870s as a summer retreat by the railroad magnet, Thomas C. Durant and his son William West Durant.

The facility now more than one hundred years later is still standing strong. Currently, the Center encompasses 20 original buildings and a total of 40, including sleeping accommodations and modernized work areas.

Camp Huntington can sleep 74 guests during the summer session and 64 during the winter session. Select buildings are discussed in detail in the paragraphs below. Recreational equipment available at the Center includes horseshoes, canoes, kayaks, an outdoor fire pit, and a challenge course.

The Fuge Dining Room, named after George Fuge, director emeritus, is located along the lakeshore with beautiful scenic views off the back porch, complete with rocking chairs.

The dining hall, built in 1980, was burned beyond repair as a result of an earthquake originating in Blue Mountain in October 1983. Classes were suspended and reconstruction began. The dining hall rebuilding project was completed in 1984 and classes resumed. 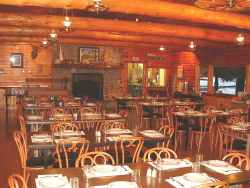 The kitchen utilizes people from each group to help, known as the kitchen patrol or KP's. Everyone should take a turn pitching in and helping.

If you or someone in your group has any dietary concerns or is a vegetarian, contact the cook at least two weeks prior to your visit to ensure dietary needs are met.

Downstairs below the dining hall is the Knox Class Room. The Knox classroom has been utilized as a laboratory, classroom, technology center, and social gathering locale.

The classroom is a large open room with folding tables and chairs. This room works fairly well for large gatherings or indoor games. 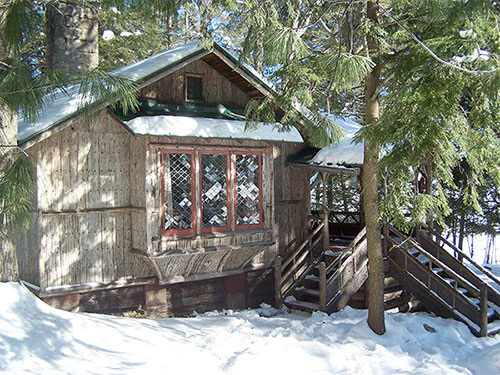 The Durant Cabin has a fabulous porch facing the shore of the lake. Built by William West Durant, his cabin included a common room, bedroom, and bathroom complete with running water.

The cabin boasts some of the most intricate mosaic twig work on tables ever seen. Durant fashioned a large desk finished with a felt top and yellow and white birch bark.

Continuing with the rustic nature theme throughout the cabin are twig and root systems of trees used as shelf supports and edging. The bathroom has a sunflower showerhead.

Past directors have used the cabin for both home and office. A kitchen was added to complete the house for living. The Durant Cabin is now used for educational and historical tours. 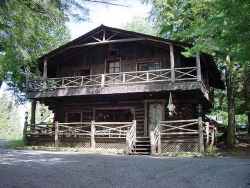 The Swiss Chalet was the first building to be built at Pine Knot in the 1870s. The building was initially a one-story cabin with a common room and two bedrooms.

As the camp started to grow and the Durant's needed more space for their guests, the Chalet received a makeover. In 1882, the addition was completed and W.W. Durant had successfully added a second story floor.

On the first floor, the top four logs were removed and longer logs put in their place. The longer logs support the second floor, which hosts three bedrooms and a balcony porch.

The construction of the new addition was frame-style as we see in houses today. The windows were replaced with Eastern-influenced detail. 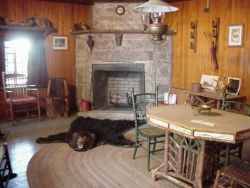 The interior of the cabin's main room was dedicated to Joe Pierson in August of 2001. Pierson was the director of the Raquette Lake Outdoor Education Center from 1985 through 1998.

The dedication included two reprinted photographs of the common room during Durant's time. A plaque with Pierson and his accomplishments adorn the walls as well.

The main room in the Chalet is now used for educational and historical representation. The second floor is used for storage, while the two lower bedrooms are used as such.

The house has a common room, three separate sleeping rooms and two bathrooms. While set with three massive granite fireplaces, they are not in usable condition. The bathrooms are furnished with elongated claw foot tubs with button fill faucets and beautifully crafted marble top sinks with intricately designed porcelain bowls. Set up with twin-size bunk beds throughout the house, it is capable of sleeping 12 people.

The Yellow Birch, White Birch, the Library and the Donnel V. Smith Director's Cabin are all part of the same building structure. The structure was lost during the fire in 1983. It was reconstructed and finished in 1986. The Birches are both open rooms with bunk beds and dressers.

The Yellow Birch sleeps eight and the White Birch sleeps 10 people. There are no bathroom facilities in these cabins; however, the His and Hers bathrooms are just a short jig away. The His and Hers is a modern facility with two showers, three toilets, and three sinks for each gender.

The Library has a small collection of books and a variety of old photographs. There are twelve chairs surrounding a large extended table perfect for small group meetings or solitude. 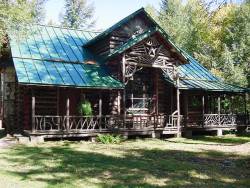 The recreation hall, now known as Metcalf Hall, was renamed in honor of Harlan "Gold" Metcalf, professor emeritus recreation and leisure studies, during the 35th anniversary celebration. Metcalf Hall is a large building with decorative dormers.

A porch spans the front of the building complete with twig and branch work handrails. A bay window along the north side is trimmed with ornate birch bark and twig designs.

The exterior of the building is constructed with horizontal natural logs. The interiors of the logs were cut and finished with a bees wax concoction that left a marvelous luster, even one hundred years later.

The ceilings are high, peaked, and covered with peeled white birch bark. The mammoth fireplace is placed in the center of the back wall.

Two small janitorial-type closets are just to the right of the fireplace. A birch canoe hangs over a bay window, while a guide boat hangs above directly across the room.

During its inception the recreation hall was used as a place for social gatherings, pool, and other games of the day. It is a magical room where great memories are often shared. 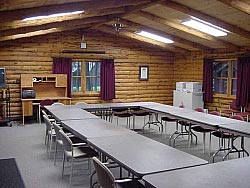 The Carlson Classroom is the newest building to be erected. The 50th anniversary of Camp Huntington was followed with a ground breaking ceremony for the Carlson Classroom dedicated in honor of Marcia Carlson, professor emerita of recreation and leisure studies.

The LOC-N-LOG style building houses the technology center for Camp Huntington. The classroom is an open room with folding tables and stackable chairs.

The technology is easily hidden within the classroom if it does not pertain to the user group. The Information Resources Department on campus continually bring new technological devices and wireless ideas and equipment to Raquette Lake keeping even the oldest buildings on campus up to date! 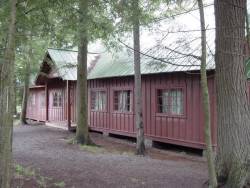 The Spruce Lodge was an original Durant building used to house servants and workers. The structure had three rooms when it was built, a small bedroom area and two larger sleeping bays.

In 2003, The Spruce dorm underwent construction and smaller rooms were created with two bunk beds for a total of four beds in each room.

The entire dorm sleeps 28 people and is generally used as the men's dorm. It has two newly remodeled bathrooms that feature a total of three toilets, three showers, and dual vanity sinks.

McDermott Hall formerly known as, Hemlock Hall, built in 1970, has accommodations for 28 people. Usually used as the women's dormitory, it is set with two bunk beds per room, sleeping four.

There are seven sleeping rooms, two common areas and two bathrooms. The bathrooms each have two showers, sinks, and toilets. The common areas are set up with tables and chairs for relaxing and chatting.

Camp Huntington features several buildings that have not been mentioned above. The facility includes a challenge course with both high and low ropes courses, a rock climbing wall, and a repelling tower.

To use the previously mentioned course, you must obtain a facilitator that has been through the most current safety workshop sponsored by the Center. The Waldbauer Nature Trail features several plants and trees native to the Adirondack forests. Approximately four miles of trails cover Camp Huntington.