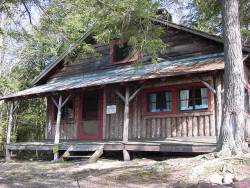 The Kirby Camp has an interesting history that can only be deduced by the building itself and furnishings within.

The four-room cabin has two walk-through closets and a two-room second floor. Each of the rooms on the first floor has at least one door leading to the outside. The closets are oblong and divide two rooms.

The second floor originally had a steep staircase up the back of the cabin leading to two rooms. The rooms on the second floor are peaked with the roof. One has a large closet and two small wooden frame beds.

The exterior of the cabin's first floor is constructed with vertical logs. The logs were left with the bark on the exterior and are beautifully finished on the interior.

The logs were originally chinked with sphagnum moss, which the squirrels like to use for their nests. It has since been replaced with oakum. Oakum is a hemp or jute fiber that has been treated with tar, creosote, or asphalt initially used for caulking seams in ships. The second floor has horizontal log construction with the same finished technique.

The cabin sits on sturdy granite rock piers. There are approximately eight blocks supporting the cabin. The camp has two interior fireplaces trimmed in birch and cedar bark. One fireplace has a mirror embedded above the mantle.

Based on the findings in this camp, verbal stories and a calling card found at Camp Huntington, we believe that Ms. Minnie Everett Kirby was William West Durant's mistress.

The story unfolds that William would put his wife out on the Barque of Pine Knot, a houseboat, and would then hop onto his bicycle and ride to the Kirby Camp approximately one mile away. Why else would you need an exterior door out of every room?

When SUNY Cortland obtained the property, bunk beds and running water were added. The cabin was rented to faculty and staff of the university weekly. Signs of the last user group were old newspapers dated 1976. The cabin was boarded up and left unused until 2003.

Throughout 2002, the Kirby camp was scrubbed, painted, modernized and cleaned. The camp is now available for rent to SUNY Cortland alumni, faculty, and staff.

Below are a few of the items found during the renovation of the Kirby Camp. Agateware, T. Kingsford and Sons cornstarch wooden crate and a Barton and Guestier wooden wine crate are all below with the history of each company. The patent dates on many of the items confirm the cabin was built in the mid-1880s. For questions about the objects or the history, contact Rhonda Pitoniac, director.

Found in the kitchen at the Kirby Camp were a few pieces of agateware. Agate ware is porcelain enamel-covered iron. L & G Manufacturing was one of the first companies in the United States to make enamelware. Enamelware became a popular choice of consumers because of its light weight and aesthetics. Agateware was also easy to clean and unaffected by acidic foods unlike cast iron cookware. Enamelware was exhibited at the Centennial Exposition in Philadelphia in 1876, making it more visible to the public. All L & G agateware has a burned stamp on the bottom in blue, Agate Ware, L & G Mfg. Co., while other companies of the time used stickers that eventually wore off.

Two French immigrants, Charles Lalance and Florian Grosjean started producing agateware between 1863 and 1870. Lalance and Grosjean opened their doors in Woodhaven New York, located in south west Queens. The two helped to turn a farm community into a manufacturing town employing more than 2,100 people. Agateware was only one of the products the company produced. They were well known for improving the process of tin stamping. Of other notoriety, L & G Manufacturing made mess kits for the Spanish-American War.

Grosjean managed the factory and had several company houses built to accommodate French workers who immigrated to work in his company. Houses were built in all of the communities hosting an L & G factory. Chicago, Boston, Harrisburg and New York were all sites for L & G Manufacturing. In New York, the company had 2,100 workers on an 11-acre plot. Harrisburg was the feeder steel mill for all of the other L & G Manufacturing sights.

As times and business changed L & G Manufacturing became the world's leader in tin stamping for almost a century. After World War II sales began to drop and the factory closed in 1955. In 1984 most of the plant portion of the property was demolished and turned into a mall with the factory clock tower remaining as the mall centerpiece.

A wooden crate with a T. Kingsford & Son Corn Starch paper label on it was found in the kitchen covered with oil cloth. Various crates were used as shelves and the cloth kept the paper in near perfect condition. T. Kingsford & Son started in the corn refining business in 1848. Their most popular product was Silver Gloss cornstarch which was sold as far away as Britain. The business started in Oswego, New York, with seventy employees and by 1880 had grown to become the largest corn refinery in the world. By 1879, 140 starch factories sprouted up throughout the United States causing the production of corn starch to more than double between 1869 and 1904. The Oswego factory produced 35 tons of starch per day and employed almost a thousand people on 17 acres. T. Kingsford & Son had everything onsite needed to complete the entire process of refining the corn right down to the packaging. The 17-acre plot included a foundry, machine shop, fire brigade, and facilities to produce wooden and paper boxes.

The Oswego-based factory is credited as being the first U.S. corn refining company to attain mass production of corn products for a global market, one of the first companies to use extensive advertising, the first to have large export trading and the first to use automatic machinery in a factory setting. The 2.5 billion dollar industry was pushed along by demand for corn starch by both manufacturers and consumers. Due to its low price, corn started to be used in the development of laundry soaps, corn syrups (used in candies), baking, brewing and vinegar industries.

During the 1890s, profits started to drop; smaller factories were purchased and consolidated by larger companies trying to regulate output while maintaining profitable prices and lowering production costs. Along with railroads, petroleum, and sugar refineries the corn refining business fell on hard times. Imported tropical starches, such as sago, tapioca and arrowroot, became popular and less expensive. 1900 brought new experienced engineers with the best machinery and factories that have sustained the past 100 years and are still in production today.

Kingsford has remained in business since its inception in 1848, and has been passed down through six generations. The company expanded to work on a variety of steam engines, boilers, and pumps. Today you may recognize the Kingsford name on barbeque products such as lighter fluid and charcoal.

A wine crate stamped Barton & Guestier with the date of 1887 on it was also found in the Kirby Camp kitchen. Barton & Guestier has been a well-known name in the wine business since 1725. Thomas Barton of Curraghmore, Ireland moved to Bordeaux France and opened a winery. Barton was quickly adopted and named "French Tom" as he found out two important keys to the wine business. First, purchasing his own vineyards he could ensure quality control and secondly business growth relied on an extensive network of growers.

Realizing the value of French wine, Barton exported 2,700 barrels of wine in 1728. By 1745, he was the leading exporter of wine and by 1785 Barton's company was exporting 125,000 barrels of wine abroad annually. Daniel Guestier was an up-and-coming wine producer supplying the American rebels during the war of independence. Guestier had fast ships built specially to run the British blockades to supply Thomas Jefferson with Bordeaux wines. On a handshake agreement, Guestier governed Barton's business, then run by Hugh Barton, for seven years while Barton returned to Ireland during wartime banishment. In 1802 Barton returned to France and joined forces with Guestier expanding the business which is still going strong today.

The company was passed down through several generations until 1954 when the surviving heir, Ronald Barton, asked another family to run the company (the Seagram group). Ronald Barton still remained in control until his death in 1986. In a consolidation, in 2001, B & G and the rest of the Seagram group became part of the international wine and spirit company Diageo. Still today B & G is reviewed and recognized throughout the world for quality wine.