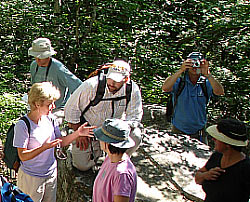 The Robert C. Brauer Memorial Education Center, located south of Albany, is a 33-acre tract that was a gift to the College by Everton and Elsie Brauer.

A remnant of a pre-revolutionary farm that was abandoned because of its untillable land 200 years earlier, the property returned to its normal forested state.

The Brauer Education Center is situated on the Helderberg escarpment. The escarpment is a classic region of fossiliferous limestone and shale formation from the Devonian age.

In 1968, Robert was a 21-year-old geology major who had just completed his junior year at SUNY Cortland. He was fatally injured during a zinc mining accident in New Jersey.

In honor of their son, Robert, the Brauer's presented the College with the property in his name in 1974. The expressed purpose of the gift was to train geologists. SUNY Cortland was the first of the 64 SUNY campuses to have a geological field station.

In 1982, with state and federal funding, buildings were completed and the first classes at the Brauer Education Center were held. Two buildings were erected: one a rustic bunkhouse sleeping 16 people; the other a main lodge sleeping 24 folks. The main lodge houses guest rooms, classroom space, dining facilities and bathrooms complete with showers.

During the first few years of use, the Brauer Education Center was filled to the brim with students. The College was hosting two five-week courses at maximum capacity. Students from several other SUNY schools attended summer sessions at Brauer. In 1985 class enrollment dropped and the College scaled back the class offerings to one session.

The following year, worldwide oil prices dropped and the need for oil exploration was minimized. Students once interested in working for oil companies fell significantly, reducing the class size. The Geology Department continues to offer a summer session.