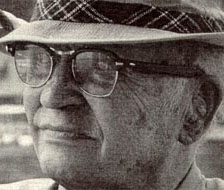 "As educators, we have a responsibility to future generations; therefore, we must bequeath to our children the exuberant joy of being able to breathe fresh air, to drink clean water, to scent trailing arbutus, to hear breezes in the top of a grove of white pines and the magic of the song of a hermit thrush in cathedral towers of red spruce, and to find individuals living in harmony with the land and with each other."

For the family, friends, colleagues and students of Dr. Harlan Goldsbury Metcalf, the world became a poorer place when he passed away on July 28, 1985. But Metcalf, or "Gold" as he was known to his friends, left behind lasting legacies as teacher, author, counselor and friend.

You can access Dr. Metcalf's dissertation from New York University at this link:

Selected by SUNY Cortland in 1947 to create and chair what is now the Recreation, Parks and Leisure Studies Department, Metcalf during his 22 years as teacher and administrator provided outstanding leadership for his students. Metcalf had a way of affirming each student's ability to be a professional. Before his retirement in 1969, he instilled in many generations of SUNY Cortland students a blend of self-confidence and humility, aspiration and perspective that would provide a solid foundation for success.

Metcalf was widely known as an expert in archery and fishing. On a 1948 canoe trip, he came upon an unused, 200-acre Adirondack lakefront property called Camp Pine Knot. Metcalf located the owner, who donated the great camp to the College. Today, Pine Knot forms the core of the College's Outdoor Education Center.

He began his teaching career at Ohio State University and George Peabody College. Following World War II he served with the National Recreation Association and pioneered its services to state government agencies in the Northeastern U.S.

Metcalf was posthumously inducted into the New York State Recreation and Park Society Hall of Fame for his lasting contributions to the advancement of the recreation and park movement on the local, state, and national level. The Metcalf legacy lives on, in the many lives he touched and in the profession he influenced.

The Metcalf Endowment supports the intellectual and professional development of students in the Department of Recreation, Parks and Leisure Studies at SUNY Cortland.

In addition to supporting honorariums to bring nationally recognized speakers to the College's annual recreation conference, the Endowment also provides scholarships for students to attend state and national professional conferences.

In funding travel to conferences and in supporting visiting scholars on campus, the Endowment enables the present generation of students to heed Metcalf's advice: "to stay consistently in the presence of the best in the sphere in which you seek attainment, and make an honest response."

Managed by the Cortland College Foundation, disbursements from the Endowment Fund must be approved by a board composed primarily of Recreation, Parks and Leisure Studies Department alumni, with representatives from current faculty and students.

While developing enrichment activities for students, the board also assures fidelity to Metcalf's vision.

"Anyone ever in Metcalf's presence was graced by his uncommon knowledge, skill, modesty, goodwill, and his unshakeable belief in the beauty and promise of every person," recalls Tom Goodale '61, professor of leisure studies at George Mason University.

"Anyone aware of his mission as a professional knew of his unwavering commitment to teaching an appreciation of the outdoors, assuring that no one was disenfranchised by discrimination, disability or poverty, and reminding public and not-for-profit agencies of the importance of parks, recreation, and leisure services," Goodale added.

Since 1947, SUNY Cortland faculty, students, and alumni have learned from that model and shared in that mission. The Metcalf Endowment, begun in 1974 by former students of Metcalf, seeks in small ways to keep his ideals alive.

The following are some of the distinguished recreation scholars and leaders the Metcalf Endowment has brought to campus over the years to deliver the Metcalf Lecture at the annual SUNY Cortland Recreation Conference.