"I truly think this was the most organized NEH program that I have ever been to. Not only was it organized, but what they wanted us to do for a project was the current thought on education. We learned how to collaborate, discuss, and produce a product."

On Sunday evening, we will gather for dinner and an opening session where you will meet the workshop directors, Drs. Kevin Sheets and Randi Storch from SUNY Cortland’s history department, who will facilitate the week’s program and events, Pedagogy specialist Jeanette Fanelli, and Gonda Gebhardt, Forever Wild’s project manager. At this opening event, you will be briefed on the week’s activities and logistics and introduced to the technology we will be using for the group projects.

On Monday morning, we will engage with historical sources, artifacts and urban landscapes in the 1890's House and throughout the City of Cortland. We will expect that you have completed readings posted on our schoology site and are prepared to think about what it was like to live in a Gilded Age industrial city.

After morning sessions that probe primary sources to explore themes of urbanization and industrialization, we will board a chartered bus and make our way to Camp Huntington.  While bussing, we will watch the 1951 Paramount film A Place in the Sun and discuss the way that Hollywood portrayed the famous Gilette murder, which took place on Big Moose Lake. Based on the real life murder of Cortland's Grace Brown, and adapted from An American Tragedy by Theodore Dreiser, the film opens discussion about representations of wilderness while connecting to key themes to be explored throughout the week.

Once we are all transported across Raquette Lake and settled at camp, we will meet Rhonda Pitoniak, SUNY Cortland’s Director for Environmental and Outdoor Education. Rhonda lives at the Camp and will provide an orientation explaining camp protocols and traditions and give a formal tour of Camp Huntington’s buildings and grounds.  The tour and discussion will focus on the history of the Great Camps and guide you as you read the cultural geography of the space.

rst full day at the camp emphasizes the cultural and artistic forces that shaped the 19th and early 20th century wilderness ideal. Historian Philip Terrie will guide a discussion of his book, Contested Terrain, to help us explore Tuesday's major question: How did 19th century Americans define "wilderness" and "nature," and how did these concepts contrast with the urban experience? Professor and author, Sheila Myers, will give insight into writing historical fiction with a focus on gender and relationships in the Durant family. A guided hike by Rhonda Pitoniak and a seaplane ride provide on-the-ground and aerial perspectives of the Adirondack’s geography, which will help you appreciate the awe-inspired imagination of artists and intellectuals who looked—and continue to look—to the wilderness for aesthetic cues.

Today our focus will turn to efforts by 19th century Americans to domesticate nature by building “civilized” retreats for their leisure pursuits. The Great Camps point to key themes of the era: consumerism, leisure, class, gender (including 19th century conceptions of manhood), and modernity. After breakfast, we will travel to Camp Uncas, built by William Durant in 1890-92 and bought by JP Morgan in 1896. Then we will travel to Camp Sagamore, built by Durant from 1895-97 and sold to Alfred Vanderbilt in 1901. In each camp, the group will consider the spaces as an extension of these industrialists’ public personas. How did they use the space? How was space specialized? How were class and gender relations experienced at the camps? In reading these various sites, we will compare and contrast the industrialists’ use of the wilderness as a retreat, understand the architectural history of the spaces, and learn about the relationship between industrial development in the region and the growth of the Great Camp movement. The architecture of the Great Camps and influences shaping their distinctive architecture will be an important component of the discussion.

Today we will use excerpts from Kristen Hoganson's article "Meat in the Middle" and her ideas about the ways in which commodities and culture move across borderlands to frame our thinking as we spend the day at the Adirondack Experience asking ourselves the following question: How did natural resources from the Adirondacks provide the basis for 19th century capitalism in the United States and how did the region's industrialists turn minerals and trees into nationally traded commodities? 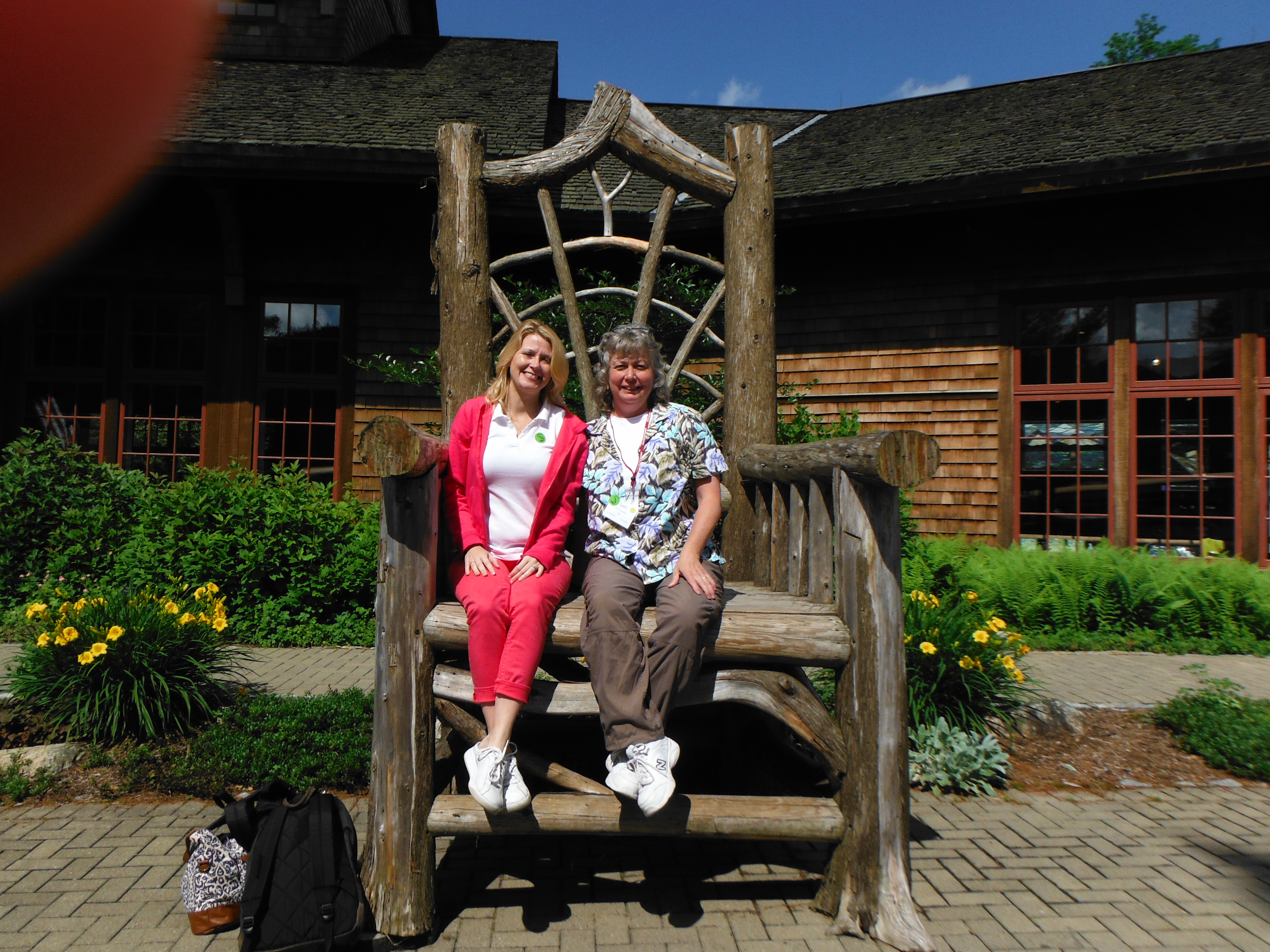 The museum documents the history of the region through historic structures relocated to the grounds, art and photography, and artifacts relating to daily life, work and industry.  Curator led-tours of exhibits will showcase the history of the region’s several industries, as Summer Scholars make connections between the wilderness environment and an urban economy.  Dr. Scott Manning Stevens will give a workshop on Native American's Adirondack history and culture using primary sources, including period photographs and original texts from the on-site archive and library. Participants will also tour a one-room log cabin hunting retreat, 19th century watercraft and a luxurious early 20th century Pullman railcar to understand the transformation in the use of the land and its resources over time. We will learn about the technology (and on-the-ground inventiveness) that made this transformation possible. The focus here is to help us understand the industrial and economic character of the wilderness as experienced by local inhabitants who resisted encroachments on their unspoiled landscape by industrialists who built rail lines and factories to reap economic advantage from the region’s timber and mineral stores, and by progressive-era reformers who applied science to the conservation and management of its natural resources.

Today we will explore ways that “wilderness” became a central focus of progressive era debates. Threads of the week’s activities (from cultural, economic, industrial and social history) reveal what was at stake in the conflict over the future of the industrial economy. The 1894 “forever wild” debate showcases in microcosm tensions pitting industrialists, progressives, and naturalists against one another as they used the political system to secure advantages. Historian Rebecca Edwards will lead a morning workshop using primary source materials to help Summer Scholars understand the broader context of progressive-era politics into which this discussion of wilderness fits. Edwards will develop a framework to understand the political dimensions of turn of the century environmentalism. You will take home a collection of primary source materials, references to the scholarly literature, and instructional resources to use with your students.

In the afternoon, groups will complete work on their final digital history projects and prepare for the evening's shared culminating experience.

Saturday morning departure follows breakfast, with stops at the Syracuse Airport and Cortland. Those flying out of Syracuse should take into account the time it will take us to get there from camp. The earliest we can arrive at the Syracuse Hancock International Airport is 12:30 PM, so no returning flight should be booked before 2:30 PM.

Skills developed and practiced during the week long workshop will be incorporated into culminating group projects. These projects take the form of a short digital documentary to be completed during the week and showcased Friday evening. For these small group projects, teams will work collaboratively through the week to produce a ten-minute documentary on one of the following themes connected to the workshop’s late 19th century content focus: peopling the wilderness, the cultural meaning of wilderness; wilderness and the industrial economy; wilderness and leisure; wilderness and gender; or the politics of wilderness. Summer Scholars are responsible for interpreting the theme, collecting primary and secondary source materials during the week (including audio and video clips of workshop leaders, photographs of artifacts and sites, scans of documents, etc.), organizing materials into a coherent and logical sequence and, using Apple’s iMovie app for the iPad, creating a digital story to share with colleagues and ultimately students. Materials collected during the week by each group will be uploaded to the workshop’s Schoology site to be permanently available to Summer Scholars and their students as they develop future instructional activities. The group project is a particularly critical component of the Forever Wild design: it encourages collaborative learning, builds community, and, importantly, helps Summer Scholars to process and understand the material they encounter during the week. The project develops instructional technology skills Summer Scholars can model for students, especially as this technology has low barriers to access in terms of prior skill level. Each evening Summer Scholars will have an opportunity to work with group members on developing group projects.

"The activities were sublime--from touring the great camps to the excellent Adirondack Museum to kayaking and swimming in Raquette Lake before breakfast--sublime!"

Any views, findings, conclusions or recommendations expressed in this program and website do not necessarily represent those of the National Endowment for the Humanities.