Gary Sczerbaniewicz: The Tower and the Shard
November 2020 - February 2021

New: an interview with the artist is now available.

Gary Sczerbaniewicz's practice involves both large-scale installation and small-scale objects referencing architectural environments interacting with the viewers on active as well as passive levels. These hybrid constructions inhabit an ambiguous space between architecture, man-made environments, installation, sculpture, and theatrical stagecraft, along with the artist's apparent fascination with psychological unease. His elaborate sculptural environments and dioramas, often enhanced by sound, create an immersive sensory experience designed to disorient the viewer to break the staid, often detached, and familiar approach to consuming artwork. Sczerbaniewicz's recent work investigates the concept of cognitive dissonance as articulated through an architectural lexicon to construct unfamiliar or fantastic scenarios. He often fuses imagery adopted from his recollection of the Cold War and Catholicism to amplify the unsettling, the weird, the eerie, and even the world of conspiracy theory. His practice becomes even more relevant in the light of a new reality affected by the global pandemic and the tenuous political climate embroidered with many threads of misinformation and untruths.

View the exhibition video in a new window. 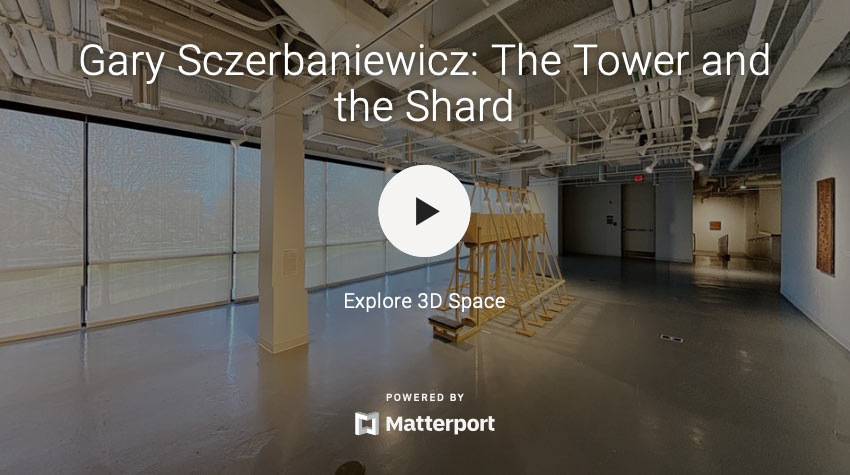 View images from the exhibition.

The interactive installation titled Neil Before Zod includes four large scale interactive objects fusing hybrid architectural systems and fringe ideas to evoke a sense of both physical and psychological disorientation. The works on display build on subject matter drawn from readings into the topics of high strangeness, the occult, and conspiracy theory, specifically relating to NASA's Apollo lunar missions. Sczerbaniewicz explains, "Several of these compelling- yet unprovable accounts involve phenomena and physical structures encountered by the Apollo astronauts and various associated military personnel during their pursuit of the lunar missions. I was often astounded to find an uncomfortable yet symbiotic interplay- perhaps a negotiated co-existence between rational science and what is conventionally understood by academics to belong to the twilight world of myth, mysticism, and lore. During the course of this research, I experienced a disorienting sense of intellectual uncertainty about the nature of truth, which began to creep into my daily thinking about official histories and the lingering sub-narratives that often co-exist with these- growing in their own dark corners of our fertile, imaginative, cultural landscape. As a recovering child of Catholicism and the Cold War, I was somehow familiar with this compartmentalization of seemingly incompatible ontologies and the resulting psychological displacements it produced within me. I was compelled to follow this artistic rabbit-hole and to attempt to translate this concept of malleable truths into a spatial, sculptural, architectonic installation work."

Wall objects from the Untitled series work with scaled-down models of real or fictitious architectural scenarios marked by evidence of a past existence, external trauma, neglect, and inevitable vestiges of time. In addition to the obvious aesthetic quality, these fossilized traces contain a rich metaphorical vein that transcends the visible and evokes hidden cryptic messages.

A supporting virtual program accessible to the public accompanies the exhibition with a diverse list of guest speakers providing a broad view of subjects such as architecture and conspiracy theories in the context of art. Among programs such as Artist's Talk with the featured artist, the gallery offers virtual documentary screenings, virtual tours, and in-person visits. Reinhard Reitzenstein, Associate Professor and Director of Sculpture Program from the Department of Art at SUNY Buffalo, will join Gary Sczerbaniewicz in a Gallery Conversation titled Sculpture in the Expanded Field. The discussion will touch on formal aspects of creative processes and inspiration in the context of personal and general practices in the field of sculpture and object-making.

Beth Saunders, Ph.D., a curator and head of Special Collections and Gallery, Albin O. Kuhn Library & Gallery at the University of Maryland, Baltimore, is scheduled to present. Her lecture titled Enigma Loop: Unraveling the Aesthetics of Conspiracy will focus on her curatorial involvement with an exhibition Everything Is Connected: Art and Conspiracy, put on by the Met Breuer in New York in 2019, her other project Apollo's Muse: The Moon in the Age of Photography, an exhibition of photographs also presented by the Met in late 2019, and other related topics.

Doctor Jennifer Minner, Associate Professor, City and Regional Planning College of Architecture, Art, & Planning, Cornell University, will participate in a panel discussion titled The City as Built is an Emotional Sculpture with the artist and the gallery director, Jaroslava Prihodova.

All lectures are held virtually via WebEx video-communication software. Detailed information and link invitations will be posted on the Dowd Gallery website and social media.

Gary Sczerbaniewicz was born in Upstate NY, received his BFA in Sculpture from Alfred University and his MFA in Sculpture & Installation from the University at Buffalo in 2013. Sczerbaniewicz is a 2016 NYFA fellow in Architecture/ Environmental Structures / Design from the New York Foundation for the Arts. He has exhibited both nationally and internationally and has completed residencies at Yaddo (2017), the Constance Saltonstall Foundation for the Arts (2016), and Sculpture Space (2013). Sczerbaniewicz recently served as Visiting Assistant Professor of Sculpture at the University of Notre Dame. Gary is represented by Anna Kaplan Contemporary, Buffalo, NY.

Dr. Jennifer Minner interviewed Gary Sczerbaniewicz as a part of her preparation for her lecture titled "Dark Houses and Eerie Cityscapes," a panel consisting of creative responses to "The Tower and the Shard," Sczerbaniewicz's solo exhibition. The recorded audio file was 1 hour and 53 minutes long. Thus only an edited portion of the interview is published. This conversation took place during the Pandemic of 2020 via Zoom.