Scholars In Residence with the Clark Center for Global Engagement

Ed Erickson recently retired as professor of military history at the Command and Staff College, Marine Corps University in Quantico, Va. Erickson is a retired regular U.S. Army lieutenant colonel and was commissioned in the field artillery in 1975. He also qualified as a foreign area officer, specializing in Turkey. During his career, he served in artillery and general staff assignments in the United States, Europe and the Middle East (including three tours in Turkey). In the Persian Gulf War of 1991, he served in the Third Armored Division as an artillery battalion operations officer, in Sarajevo in 1995 as a special assistant to the NATO Force commander, and in the invasion of Iraq in 2003 with the Fourth Infantry Division as General Raymond Odierno’s political advisor. He is the recipient of two Bronze Star medals, the Legion of Merit and numerous other military awards. He returned to Baghdad, Iraq, in 2007 for a year to work as professor of political science at the Ministry of Defense Training and Development College before coming to the Marine Corps University in Quantico in 2009. He has master’s degrees from Colgate University and Saint Lawrence University as well as a Doctorate in History from the University of Leeds in the UK.

Erickson is widely recognized as one of the foremost specialists on the Ottoman Army during the World War I. Among the numerous books he has written are Ordered To Die, A History of the Ottoman Army in the First World War; Defeat in Detail, The Ottoman Army in the Balkans, 1912-1913; Gallipoli, The Ottoman Campaign; Ottomans and Armenians, A Study in Counterinsurgency; Gallipoli, Command under Fire; and Palestine, The Ottoman Campaigns 1914-1918. He is the co-author, with Dr. Mesut Uyar, of A Military History of the Ottomans, from Osman to Ataturk. Erickson is also the author of Strategic Water; Iraq and Security Planning in the Euphrates-Tigris Basin and A Soldier’s Kipling, Poetry and the Profession of Arms. He is a frequent visitor to Europe and the Middle East and his latest book project is titled Phase Line Attila, The Amphibious Campaign for Cyprus. 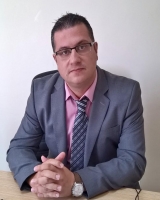 Andreas Kotelis served as a scholar-in-residence at the Clark Center for Global Engagement and a visiting instructor at the International Studies Program at the State University of New York College Cortland. He received his Ph.D. from Bilkent University in Ankara, Turkey, in 2013, his M.A. in conflict analysis and resolution from Sabanci University in 2006, and his B.A. in Balkan, Slavic, and Oriental studies at the University of Macedonia, Thessaloniki, Greece. His main research interests include Greek-Turkish relations, international negotiations, conflict resolution, and track-II diplomacy. On several occasions, he has acted as a facilitator on track II and multi-track initiatives. From 2013-2016 Kotelis was an assistant professor in the Department of International Relations, Zirve University in Gaziantep, Turkey.

Kotelis taught the following courses while serving as a scholar-in-residence:

In addition, he served as an advisor to the Model European Union delegation and participated to the SUNYMEU Conference in New York City  March 30 to April 2, 2017.

Kotelis also organized a lecture for the Clark Center for Global Engagement titled "China and the Future of American Hegemony During Trump’s Presidency" by Oguz Dilek Ph.D., Keele University on April 18, 2017. Kotelis represented SUNY Cortland and the International Studies Program at the College at the 58th Annual Convention of the International Studies Association in February 2017 in Baltimore, Md. An Individual Development Award allowed him to present his research at this conference. He delivered the 2017 European Union Day Keynote Address titled “Resolving Cyprus – Peace in the Mediterranean” at SUNY Cortland on April 25, 2017. He also served as a panelist for the following events at  Cortland: “State-Sponsored Terrorism: Fact or Fiction? Panel” on March 22, 2017, and “Talking to Terrorists. Non-Violence and Counter-Terrorism. Lessons for Gaza from Northern Ireland. Panel” on April 13, 2017. Finally, Kotelis gave a presentation about conflict and conflict resolution at the Seven Valleys New Tech Academy, Cortland, N.Y., on March 7, 2017.