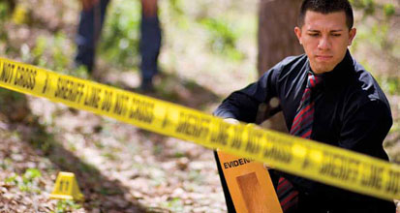 "I want to be community focused. If you know the community well enough — if you know the parents and know the kids and you’re cool with everyone — then you know what’s going on, and who’s doing something wrong."

Jon wants to go into law enforcement after he graduates from SUNY Cortland, and two very different role models helped drive that decision.

One is the cops he’s watched on TV shows such as “Law & Order,” where police work tends toward edgy action generously laced with gunfire. Then in contrast to that TV cop stereotype is the police detective he got to know in high school in Pleasantville, N.Y. “He was nice to us and he was a really cool person,” Jon recalls. “I thought that was pretty interesting.”

In his work at Cortland, Jon’s getting insight on both ends of this spectrum and everything in between. A course on deviant behavior taught him not to jump to easy conclusions about people. A class on drug policy sparked debates about the pros and cons of legalizing drugs. An internship in Drug Court looked at alternatives to jail time for first-time offenders. Other courses explore topics such as capital punishment, white-collar crime and the sociology of violence.

“The classes for my major I really like,” Jon says. “I feel like I’ve grown up a lot, and I’m learning a lot.”

Among the important things Jon’s learning at Cortland is what kind of cop he wants to be. Despite the entertainment value of TV cop shows, he’s leaning more in the direction of that hometown detective from Pleasantville.

“I want to be community focused,” Jon says. “If you know the community well enough — if you know the parents and know the kids and you’re cool with everyone — then you know what’s going on, and who’s doing something wrong.”

With his studies, his involvement in the Criminology Club, and his membership in the Pi Kappa Phi fraternity, Jon is a busy guy. So when you ask him what’s one of the most valuable things he’s learned at SUNY Cortland, his answer is no surprise: “Time management,” he says.