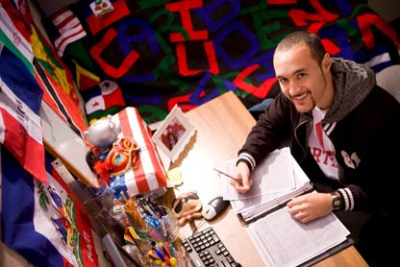 "Put yourself out there. Go outside your comfort zone, and then figure out how to make yourself comfortable."

The other is about venturing into unfamiliar territory.

“I came to Cortland because it was different from what I was used to,” says Carlos, a senior who grew up in a Puerto Rican family and a Latino neighborhood in Brooklyn. “I came with the mindset that, when I get a job, most likely it’s going to look different from what I’m used to. I wanted to adjust.”

Boy has he adjusted.

An outgoing guy who’s animated when he speaks, Carlos has used Cortland to work on what he calls a “universal appearance,” which, he says, “means that I can walk through any door and communicate with any type of person from anywhere and be able to affect their lives for the better.”

Carlos has affected lives as a resident assistant in his residence hall and a tour guide for visiting high school students. He’s an intern with the Multicultural Life and Diversity Office, and speaks at conferences and retreats on diversity and multiculturalism. He’s frequently called upon to talk with high school students from urban areas who are considering Cortland.

His advice to them? “If you stay in your room and don’t want to talk to different people, you won’t get anything out of it. Put yourself out there," he tells them. "Go outside your comfort zone, and then figure out how to make yourself comfortable."