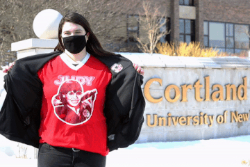 
SUNY Cortland was among 32 SUNY colleges that participated in the 2021 Women’s Empowerment Draft organized by Art Force 5.

Founded at Alfred University, Art Force 5 is focused on celebrating diversity, non-violence and other important topics through community-based art.

The Women’s Empowerment Draft, created in 2020, highlights living and historic women of significance by borrowing the model of a pro sports draft. Art Force 5 created striking portraits of the 32 women picked for this year’s “draft” and put those images on football-inspired jerseys.

Students from across the SUNY system modeled those jerseys around their campuses and virtually recorded a draft ceremony, explaining each woman’s accomplishments and message.

Sconda’s pick in the Women’s Empowerment Draft was Judy Heumann, a disability rights activist who served in both the Clinton and Obama administrations. Heumann, who fell ill with polio as a child and used a wheelchair for much of her life, founded a group called Disabled in Action in 1970 and lobbied for legislation to support those of different abilities. She was the assistant secretary of the Office of Special Education and Rehabilitation Services in the U.S. Department of Education from 1993 to 2001 and was named special advisor on international disability rights for the U.S. State Department in 2010.

The author of Being Heumann: An Unrepentant Memoir of a Disability Rights Activist, Heumann was also featured in the 2020 documentary “Crip Camp,” which tells the story of a camp in the Catskills for teens with disabilities that Heumann had attended as a child.

Mosaics of the women selected in the draft will ultimately be displayed on participating campuses. Trading cards of the draftees are available online.

The university is representing Judy Heumann, a disability rights activist.