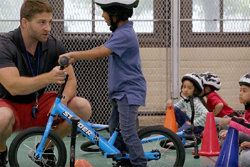 Some two dozen 5-year-olds gathered around its perimeter murmuring, squealing and just barely holding back the urge to lift a crimson flap and peek.

Benjamin Ferder ’10, M ’15 had added these dramatic flourishes to make sure his kindergarten physical education class at P.S. 311 Lucero Elementary School knew something new was definitely coming their way.

He dropped a few hints to them about the concealed pile of treasure and quickly flashed a simple picture that included a bicycle. The youngsters’ eager fidgeting escalated. A few edged closer.

Then, with a wizardly flourish, Ferder whipped off the cloth hiding five tiny children’s bicycles. Screams erupted from the kids.

“I lifted the tarp up and their eyes just sparkled,” he said. “They were so excited, so happy, they were just cheering.

“For me, that’s what teaching is all about, just watching those smiles occur,” Ferder said.

Exciting, healthy things don’t regularly happen for children living in Bronx, rated 62 of 62 — dead last — in the state for factors that influence wellness, such as poverty, diet, exercise and access to health care, according to an annual county-by-county assessment of the Empire State done by the Robert Wood Johnson Foundation. The Bronx, for example, is relatively lacking in public parks and other safe places to play and exercise.

“I grew up in Westchester, and I believe it’s the top five county in the state for physical activity,” said Ferder, who currently lives in Mamaroneck, N.Y., with his wife, Marisa, and one-year-old son, Owen. “And because I grew up about 15 minutes away from the Bronx, it’s interesting to see that difference. You can go from a county that’s ranked top 5 in the state to another county that’s ranked last.”

Largely through Ferder’s efforts, the elementary school became the first in the Bronx to implement a bike program to help children improve their physical ability, balance confidence and social skills, according to Ferder and his former classmate and mentor in the New York City schools system, Cristina Muia Rios ’08.

“There’s no other school in Bronx with the Strider Program,” said Rios, an instructional coach with the Office of School Wellness Programs, New York City Department of Education, who supports schools with improving the quality of physical education.

The Strider Education Foundation paid for the 20 new children’s training bikes at Lucero and provided a curriculum, Ferder said. The foundation’s mission is to teach every child in America how to ride a bike in kindergarten P.E. class.

The non-profit organization sent a video production company to Lucero to film the children's experience. “All Kids Bike in Bronx, New York” is set to premiere Jan. 30 in Washington, D.C. A short clip is available now.

Strider calls its bicycles “balance bikes,” according to Ferder.

The method is safer and does more to build confidence, Ferder said. His students then can try locomotion with pedals, wheeling around the small indoor gym or in a narrow courtyard outside the school.

“It was moving for me to see the students overcome fears, practice balancing on two wheels, being able to glide, and the biggest goal being able to ride a bike using the pedals,” Ferder said.

Rios recalls when Ferder first reached out to her a year ago, inquiring about a bike program.

“He was interested in bringing bike safety to his school,” she said. “He thought it would be a great, fun thing for kids to learn, being that they don’t have access to bikes and providing them with a competence in education including bike safety was really important.

“I reached out to one of my colleagues who works directly with the Bikes New York program in Staten Island,” she said. “Ben came out there to see how it was implemented.”

“They couldn’t wait to start using the bikes,” Ferder said. “Especially learning about putting on the helmet, adjusting the helmet, the proper way to get on the bike, off the bike. They just couldn’t control themselves; they were so happy.”

The children now will have both a lifetime skill and an alternative mode of transportation, he noted.

Having concentrated in adapted physical education while earning his master’s degree from SUNY Cortland —working closely with Associate Professor Timothy Davis — Ferder especially wanted to include some of his class with special needs in the program.

The bike program has captivated many teachers, administrators and children’s parents.

“Introducing the Strider bike program helped change the way students behaved and focused in the classroom and it also allowed students to tell their parents what happened at school,” Ferder observed.

Tyler Wallach, director and producer at Red Leaf Film, came to Lucero to record Ferder’s class from March to June 2019 for the Strider Education Foundation video.

“His film crew not only were able to film the kids in physical education classes riding the bikes from step one, they were also filming the students and how they interacted at lunch, at recess, in the classroom,” Ferder said. “Then the teachers were being interviewed as to what difference riding a bike truly made.

“Plus, once the kids left school, you could hear how they interacted with their parents, Ferder said. “They told us if they asked their kids, ‘What did you do today?’ They were able to talk about riding a bicycle.”

Upon receiving his bachelor’s degree in 2010, he headed to New York City’s New Visions Charter High School for Advanced Math and Science II in the Bronx. At this fledgling school, Ferder helped launch both the junior varsity and varsity basketball teams. A few years later, he heard about the Lucero elementary P.E. teacher opening on a Facebook page maintained by SUNY Cortland alumni educators.

“When I interviewed him I explained to him: these were big shoes to fill,” said Rios, who runs P.E. Works, a mayoral initiative that supports high quality physical education in all New York City schools. She had preceded Ferder in his physical education and wellness roles at Lucero and hired him in 2015 as her own replacement.

“He rose to the challenge and he superseded everything I had expected of him.”

Helping a school offset the community’s health disparities with wealthier districts often involves not just promoting an active lifestyle, but things like nutrition education and removing unhealthy foods from the children’s lunch menu. Before she left Lucero, Rios had raised the school’s Wellness Council rating to “gold plus.” In Ferder’s first year, 2015, he elevated the rating to “platinum.” Now Ferder represents the Office of School Wellness Programs to foster wellness councils among other New York City elementary schools at two annual professional development meetings.

“I strive for all of my schools to have wellness councils just like Ben’s, which has continued to flourish,” Rios said. “Whenever I do have a school that’s interested in having a wellness council, I try to set them up where they can talk to Ben.”

Going forward, Ferder encourages other Bronx elementary schools to bring a bikes program to their own classrooms.

“It was a great experience and I look forward to continuing the program in spring 2020 with my kindergarten and first grade classes,” Ferder said. “Most important, I hope the program is able to take off in other schools in New York City.”

The university is representing Judy Heumann, a disability rights activist.