The works on display include large-scale solitary objects, small sculptures combining traditional Chinese lacquer techniques, 3-D printing, and laser-cut technology, as well as two-dimensional wall pieces. But all pieces exhibited in the gallery are characterized primarily by the use or depiction of tree remnants in combination with other materials and digital technology. 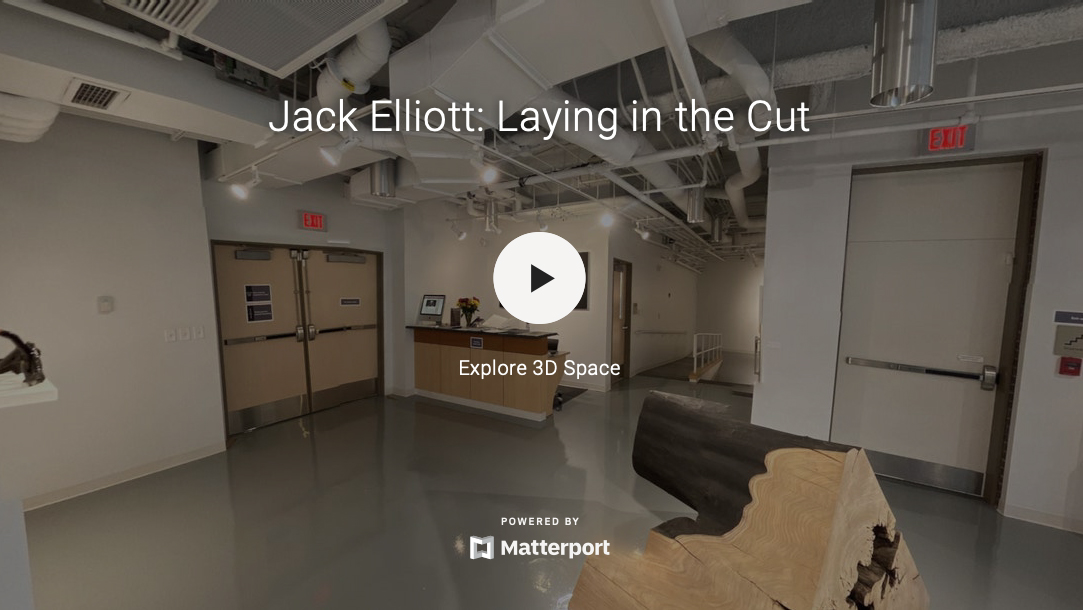 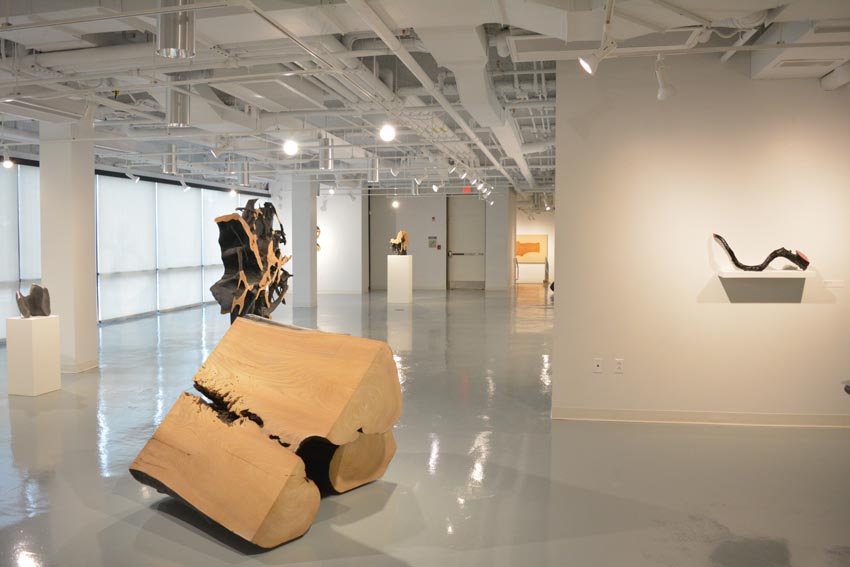 View images of the exhibition

Jack Elliott is an interdisciplinary artist, writer, and Associate Professor at Cornell's Design and Environmental Analysis Department, in the College of Human Ecology. In the conceptual domain, Elliott is interested in the aspects of the material culture of the built environment that express a society's set of values as they pertain to the natural world, especially regarding environmental ethics and aesthetics. In the practical sense, as a trained architect and designer, he is interested in integrating appropriate technology through the physical project situated in a real-world context. Thus, making serves as a stimulant for design discourse, a conductor for technological developments, and an exemplar for commercial enterprise.

In general, Elliott produces sculptures that explore the relations between trees, people, and our shared biophysical environment. These "Arborworks" are derived from parts of trees that have been naturally harvested or have been removed because of disease or obstruction. The sculptures often refer to an environmental issue, such as climate change or the depreciation of nature, but their primary purpose is to move the viewer through their form and surface, often charged with symbolic associations. Elliott's broad practice brushes against topics associated with human ecology, nature, and the Anthropocene. Several pieces in the show intentionally introduce synthetic or manufactured materials to contrast the raw materiality of wood. The juxtaposition brings forward questions addressing how technology and industry lean against the natural world and how to interpret and think about the outcome of this interaction. The work exposes the hidden beauty of these specimens through strategic planar cuts and intentional in orientations and placements. Each object is different, but they are all characterized by the aim to challenge ideas about the human/nature relationship through juxtapositions of the geometric and the organic; the intentional and the spontaneous; the light and the dark. Elliott adds, "I do not force the material away from what it is as a sign of mastery. I work with the material as it is to allow its hidden powers to be revealed through a set of minimalist interventions. My sculpture appeals to contain the biophilic sensibility, the love of life/nature that we all share, regardless of our backgrounds. The sculpture intends to de-center the anthropocentric for the biocentric, where the boundaries between humans and trees are deliberately blurred in a kind of ecological post-humanist approach to art."

In the effort to contextualize the exhibited works, a supporting in-person and virtual program accessible to the public accompanies the exhibition with a diverse list of guest speakers and programs covering topics such as biology, eco-art practicum, and other fields of study. The gallery offers documentary screenings, a workshop, virtual tours, in-person visits, and Artist's Talk with the featured artist. In addition, Jack Elliott will deliver a lecture summarizing his practice as a sculptor and academic that deals with ideas of "Nature Inside," both in a theoretical and a practical sense.

Steven Broyles, Professor at the Department of Biological Sciences at SUNY Cortland, will present a lecture titled "A Walk Through Wood" on the importance of tree diversity in our ecosystem and the impart and the long-lasting implication that the loss of diversity has on the urban environment.

Several accomplished speakers will join a virtual panel discussion offering their perspective on eco-art, the environment, and insights on what these fields of study have in common in a presentation, "Natural Emergence", Johannes Lehmann, Professor at the School of Integrative Plant Science Soil and Crop Sciences Section, College of Agriculture and Live Sciences at Cornell University; Timothy Murray, Professor of Comparative Literature and English, College of Arts and Sciences, Director of Cornell Council for the Arts, and Curator at the Cornell University; and Patricia Watts, writer, curator and founder of the EcoArtSpace art collective, New Mexico will present and discuss their involvement with art, ecology, and the natural world.

Steven Broyles
SUNY Cortland biologist Steven Broyles is part of a team that recently received $1 million to explore whether the plant also holds secrets that could help treat heart disease and cancer. Professor of biological sciences, Broyles is a co-principal investigator of a $1 million Enabling Discovery Through Genomic Tools (EDGE) award overseen by the National Science Foundation's Biological Science Directorate.
Broyles investigates milkweed pollination and how interactions with insect pollinators contribute to pollen-mediated gene flow and interspecific hybridization. He is currently involved in creating inbred lines of Asclepias curassavica to be used as tools of genomic exploration with Cornell scientists Anurag Agrawal and Georg Jander. He is also exploring the fate of purple milkweed (Asclepias purpurascens) in the Northeast as the species continues to decline. In addition, professor Broyles enjoys giving public talks and discussions on The Colors of Nature, Food Fight: How Genetic Engineering makes sense for Agricultural Sustainability, Pollination Biology, and The Birds of Upstate New York.

Johannes Lehmann
Lehmann focuses his research and teaching on soil biogeochemistry and soil fertility management. His specialization is in soil organic matter and nutrient studies of managed and natural ecosystems, focusing on soil carbon sequestration, nutrient recycling from wastes, biochar systems, circular economy, and sustainable agriculture in the tropics (especially Africa). His research stretches from ultra-fine scale microscopy to examine carbon stabilization in soils to global-scale carbon and nutrient cycles. Lehmann is interested in advancing a general understanding of biogeochemical cycles of carbon and nutrient elements in soil, providing important insight into regional and global element cycles such as the carbon or sulfur cycle. This field of research has global and local relevance with implications for climate change and environmental pollution. The strong background in the chemistry, biology, and physics of soils and their cycles provides the basis for developing intelligent solutions for sustainable soil and land use management. The most exciting examples include the discovery of stabilization mechanisms of organic matter in soil nano-structures and the development of a biochar soil management technology that improves soil fertility, sequesters carbon, and reduces off-site pollution. Recent efforts involve the development of conversion of wastes to valuable fertilizers and the discovery of novel reactions and pathways of nitrogen in soil organic matter and plant uptake. Lehmann received his doctorate and Diplom Geooekologe at the University of Bayreuth. (Source: Cornell.edu)

Timothy Murray
A Professor of Comparative Literature and English, Timothy Murray is Director of the Society for the Humanities, Curator of the Rose Goldsen Archive of New Media Art, and co-moderator of the -empyre- new media listserv, and co-curator of CTHEORY MULTIMEDIA. A curator of new media art, and theorist of the digital humanities and arts, he sits on the National Steering Committee of HASTAC and is currently working on a book, Immaterial Archives: Curatorial Instabilities @ New Media Art, which is a sequel to Digital Baroque: New Media Art and Cinematic Folds (Minnesota, 2008). His books include Zonas de Contacto: el arte en CD-Rom (Centro de la Imagen, 1999), Drama Trauma: Specters of Race and Sexuality in Performance, Video, Art (Routledge, 1997), Like a Film: Ideological Fantasy on Screen, Camera, and Canvas (Routledge, 1993), Theatrical Legitimation: Allegories of Genius In XVIIth-Century England and France (Oxford, 1987), ed. with Alan Smith, Repossessions: Psychoanalysis and the Phantasms of Early-Modern Culture (Minnesota, 1998), ed., Mimesis, Masochism Mime: The Politics of Theatricality in Contemporary French Thought (Michigan, 1997).
His research and teaching cross the boundaries of new media, film and video, visual studies, twentieth-century Continental philosophy, psychoanalysis, critical theory, performance, and English and French early modern studies. (Source: Cornell.edu)

Patricia Watts
Watts is the founder of ecoartspace, which recently became a membership platform for artists addressing environmental issues. From 1999 to 2019, ecoartspace operated as a bi-coastal nonprofit in partnership with Amy Lipton. Watts has curated over thirty art and ecology exhibitions including Performative Ecologies (2020), Contemplating OTHER (2018), Enchantment (2016), FiberSHED (2015), Shifting Baselines (2013), MAKE:CRAFT (2010), and Hybrid Fields (2006). She has interviewed thirty pioneering ecological artists for the ecoartspace archive and has written Action Guides of replicable social practice projects including Eve Mosher's HighWaterLine and Tattfoo Tan's S.O.S.. Watts has a visionary entrepreneurial approach to curating that supports transdisciplinary and transformative collaborative environments.