Brandi Kelly: Non-traditional All the Way 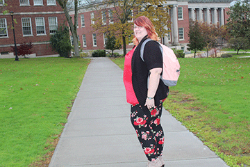 
To SUNY Cortland junior Brandi Kelly, the non-traditional classmates she meets are like family and the cozy non-traditional student lounge tucked away in a corner of Cornish Hall is her home away from home.

Kelly, 35, has embraced her identity as a non-traditional student as a means of coping with the complexities of her pursuit, relatively late in life, of a bachelor’s degree.

“There are others just like me dealing with the same challenges,” said Kelly, an adolescence education: English major who makes the long trip to classes twice a week from Binghamton, N.Y.

Like catching the relatively infrequent bus from the remote Route 281 commuter parking lot. Tired of scrambling for a timely bus, Kelly solved the dilemma by quizzing her non-traditional cohort on the group’s Facebook page. A classmate advised her to catch a bus coming from West Campus Apartments at the Route 281 commuter lot and get off and take another bus along the way to reach upper campus. It has worked like a charm.

“I was so used to Broome Community College where it’s all right close together,” Kelly said. “Just park and go inside. It was a big switch for me. I did my best to face the challenge and met it head on.”

Another non-traditional student clued her in on the easy and convenient walking shortcuts on campus. One steers the pedestrian through Cornish, Van Hoesen and the School of Education buildings as a convenient route to her final destinations.

“The best thing you can do is offer the same type of support system to each other, so that you can hopefully make some new friends,” Kelly said. “I’ve already made a couple of new friends in the Non-Traditional Student Association.”

Kelly serves as president of the association, in fact. Although new to campus herself, when she learned of the vacancy she stepped up and took on the role when a flurry of graduations and changes left some offices open.

“I’ve always known that I could be a leader but also give people knowledge and teach them,” Kelly said. “I just kind of denied it for a while. And then I realized that I wanted to teach.”

Kelly honed her club leadership skills at SUNY Broome Community College, where she was very active in the Japanese Animation and Culture Club, eventually becoming its president.

“When I was just out of high school, I got into all the anime stuff, like Sailor Moon, a character from one of the anime shows I watched,” Kelly said. “I was really interested in Japanese culture.”

The SUNY Broome club led her to her current boyfriend, in fact. Her club involvement was Kelly’s way of transitioning from high school to college friendships, a strategy she’s revisiting at SUNY Cortland, where she followed a close, non-traditional student friend from SUNY Broome.

The child of a single mom, Kelly graduated from the Johnson City schools. When not at college, she has worked since she was 16 at a variety of customer services jobs and grappled with what to do with her career.

“My friends had kids and I realized how much I enjoyed spending time with them and teaching them and helping them learn,” Kelly said. “That’s when I started to discover that I would be really, really good in teaching.”

A few weeks into her first semester, she switched her major from childhood/early childhood education.

“I realized I had a bigger passion for teaching English: reading, writing, analyzing and such,” Kelly said.

“There’s a family event we’re working on, and mostly these will be kind of family stuff as a lot of the non-traditional students have kids and husbands, wives or significant others,” Kelly. “We’d like to plan a social event at the planetarium.

“We can give each other the support that’s not like the students who are just coming into college,” Kelly said. “We don’t have all the usual concerns of the college life, such as getting into sororities or fraternities. It kind of provides for me the opportunity to meet people who are similar to my situation, so that I feel welcomed, integrated.”