Graduating candidates display their final collection of artworks, writing, and oral presentations that fulfill the year-long thesis requirement in their designated programs. 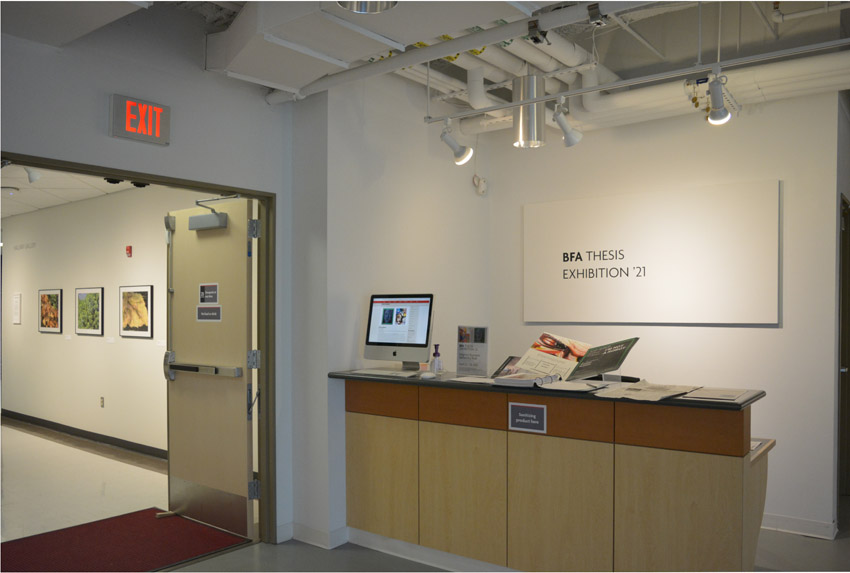 View images from the exhibition

I'm not a robot, a thesis exhibition by BFA candidate and digital media artist Stephen Buscemi explores the boundaries between the physical and digital realm. For his large-scale paintings, he uses principles employed by facial recognition technology to enhance traditional portraits. His second body of work builds on characteristic aesthetic qualities of the CAPTCHA (Completely Automated Public Turing test to tell Computers and Humans Apart) program to create visual poems. Although rooted in digital media, Buscemi redirected his attention to traditional mediums like painting and printmaking, where he found potential for a new personal narrative. He explains, "I am greatly interested in a machine's ability to exhibit behavior indistinguishable from a human, and also the visual methods they use to accomplish the task determining the nature of the interaction between computer and the user."

The work responds to the conceptual limits of digital programs like artificial intelligence and aims to transform its inherent purpose for expressive purposes rather than commercial function. Created images critically re-evaluate the information that has been deconstructed and reconstructed through machine input. Both series not only exist through physical painting but also can be brought into augmented reality. The reversible system is questioning how information can be altered and misappropriated in both the real and virtual world. Buscemi's "facial recognition portraits" can be recognized by digital filters (widely used in communication platforms such as Messenger, Instagram, WhatsApp, etc.), manipulated through the camera lens, and placed in augmented reality that is readily available to smartphone users. He adds, "I think the visual forms resulting from these programs have great creative potential when examined through the unique perspective of an artist and capable of enhancing the visual direction of the digital age driven by data. I was also inspired by the DADA movement, video art of the '70s, George Orwell's writing, and other artistic directions as they contain aspects of data and information manipulation in both virtual and real plane."

Buscemi, a Long Island, NY native, has previously exhibited in the Student Select '18 at The Dowd Gallery. He participated in a virtual exhibition as a part of the Common Problem Pedagogy Project titled COVID-19 Safety Campaign. Since his admittance into the BFA program in 2017, he has become an active member of the Cortland arts community.

Samantha Reali, the BFA candidate with a concentration in painting, presents a series of paintings on canvas and works on paper titled Hypnagogia. Her work analyzes the correlation between fabricated memories, perceived reality, and deteriorating self-esteem affected by mental health issues. Reali produces both drawn and painted renderings of seemingly nonsensical scenarios. The perspective is purposely skewed to question the reliability of reality and the existence of human consciousness. Samantha states, "I intend to communicate these internal sensations as they appear in my mind and the way how they manifest in my consciousness. Through painting, I hope to relieve some personal tension and internal conflicts. I attempt to comfort other sufferers by rejecting the assumption that their afflicting thoughts are uncontrollable, unshared, and entirely unique to them. I am interested in reducing or abolishing social taboos associated with unseen forms of illnesses through honest communication. My effort is to create an atmosphere that encourages open conversation, thus creating fewer instances of individuals becoming debilitated from undiagnosed issues due to the fear of seeking psychological assistance."

Alongside the issues of psychological nature, Hypnagogia tackles the notion of the very existence of memory. Exaggerated aesthetics illustrate the intangible quality of memory. The heightened visual forms represent the hallucinatory transitional state of consciousness between wakefulness and sleep. She works through her understanding of existential theories and creates a new reality about human minds' abilities that extend beyond the present.

Samantha Reali is a first-generation college attendee from Staten Island, NYC. Along with her admittance to the Honors Program, she received Jo Schaffer Award in Art History, Gerald N. DiGusto Scholarship, Anderson Family Scholarship, and the Honors Scholarship. She served for a short time as president of the Artist Exhibition Association and moved on to be a teaching assistant for Art in the Ancient World and Drawing I course. Reali has been an active member of the arts community in Cortland and has exhibited her work in several renditions of Student Select shows at Dowd Gallery, organized by the Art Exhibition Association (aka Art Club). She will pursue her Master of Fine Arts in Studio Art at the University of South Carolina starting Fall 2021.