Mijatovic's work is strongly influenced by uninhabited residual landscapes of urban decay and gray facades of the social-realist architecture of Eastern Europe. The abstracted forms dominating most of her compositions draw from a general theme of the industrial landscape and the interest in man-made structures and objects defined by the quiet void of human presence. Her approach to spatial interpretation is an amalgam of extracting visual shapes from their logical setting (electric power plants, wiring systems, factory interiors) taken out of context yet realistically rendered and juxtaposing them against flat backgrounds. The underlying grid system references industrial spaces with a rich history of human activity, alluded to through architectural forms. Multilayered veils of thin glazed surfaces reduce industrial structures to a residual patina that recalls space and time. She constructs emotionally charged images as if they were snapshots of memory or lingering longing for the motherland. Mijatovic explains, “Materiality vs. perception. Reality vs. memory. Physicality vs. spirituality. Formal elements are an important aspect of my creative investigation, and such is the aforementioned considerations of color palette, and composition, as well as tactile qualities of the substrate and finished surface."

View images from the exhibition 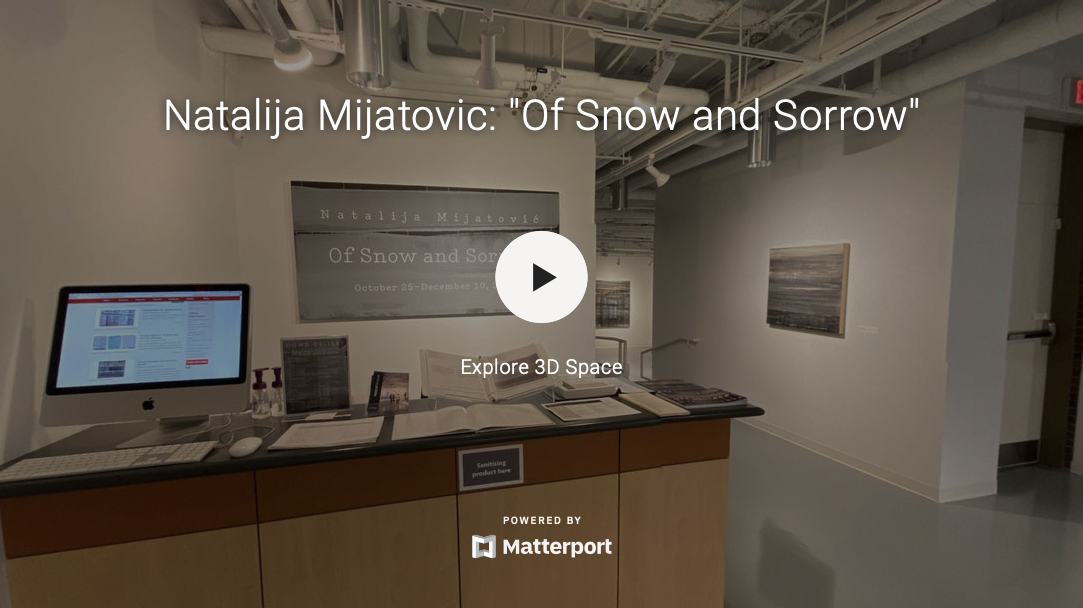 The flatness of images and a monochromatic subdued color pallet capture the reductive evolution of memories and the ever-present residue of nostalgia. The representational elements, as well as abstracted forms, illustrate trauma associated with the departure from her home country and the transitional period of an immigrant in a new environment. The artist adds, “I apply thin layers of paint in a slow mourning ritual. Veiling of shrouds, as caring, preserving efforts to stop the decay. Melancholic and meditative, as countless small marks are being made, I am in a state of permanent prayer, mindful of the hand that makes the mark yet remains unnoticeable. I often build up my spaces by painting them in detail and then proceed to cover with numerous veils of transparent paint to pull some details upfront again, mostly leaving it in a suggestive state of quiet presence. Obliteration and restoring - the notion of loss in terms of painterly language are related to the reduction in palette and absence of figuration. I think of the non-presence of people rather than their absence. Non-presence seems more active, in a way, it’s a space in a latent state. Absence is a space that is left behind. I think of spaces I create as a refuge or a quiet place for us to find a moment of reflection.”

With each project, the gallery designs a supporting program alongside the exhibition to set the presented works in a wider context. A series of multidisciplinary, in-person, and virtual programs accessible to the public offer a list of guest speakers and events addressing topics present in displayed artworks, such as poetry, music, aspects of psychology or architecture. In addition, Natalija Mijatovic will deliver a lecture, providing background for her practice as a painter and educator that incorporates notions of personal experiences as a backdrop for her paintings.

Both external and on-campus accomplished professionals will contribute to the program, representing both creative and theoretical elements found in Mijatovic practice. Imprints In Snow is a reading of poems that considers fading geographies, the traces left behind, and the absences that follow. The reading will include poems from a diverse group of writers including Paul Blackburn, Adrienne Rich, Wislawa Szymborska, and Gregg Weatherby. The poems will be read by Heather Bartlett, Girish Bhat, Laura Dunbar, and Howard Lindh, Adjunct Lecturer at English Department at SUNY Cortland and organizer of the event.

A musical performance, Three-Winged Wisdom: Sounds for Snow and Sorrow, will highlight Grammy-recognized vocalist Jacqueline Horner-Kwiatek from Princeton University and award-winning composer Daniel Thomas Davis from Department of Music, Binghamton University, presenting a genre-crossing musical program curated in response to Of Snow and Sorrow exhibition that includes a millennium of vocal music. Selections include chants by Hildegard of Bingen, 13th-century Portuguese cantigas, new songs for voice and electric hurdy-gurdy and Davis’ Three-Winged Wisdom, which recently premiered at the Metropolitan Museum of Art.

Two Gallery Talks will feature academics who will focus on both specific aesthetics and also psychological fundamentals inside of Mijatovic’s artworks. Vladimir Kulić, Associate Professor, Department of Architecture, College of Design, Iowa State University is co-curator of a highly regarded exhibition titled Toward a Concrete Utopia: Architecture in Yugoslavia, 1948–1980’ at the Museum of Modern Art in New York. He will speak about the architecture of the post-Second World War period of former Yugoslavia in relation to welfare systems established both in the socialist East and the capitalist West that promised economic prosperity, upward mobility, and greater equality and social security for all. Leslie Eaton, Professor at the Department of Psychology, SUNY Cortland, will deliver a talk Emotional Aesthetics of Place: Attachment, Loss, and a Quest for Hope providing a view into the psychological landscape affected by experiences associated with attachment and emotional connection to a physical place. Eaton explains, “Psychologists proposed that an individual’s personality and social-emotional health depends on the quality and stability of their previous relationships, beginning with the infant-caregiver bond. Attachment focuses on the quality of relationships and our response to separation and loss. These ideas may help us to understand and celebrate the work of Natalija Mijatović through the exploration of attachment to place, relational trauma, and the quest for hope following a traumatic life event.”

In addition to talks and performances, two documentary screenings will serve as a visual supplement with references to inspiration for Natalija Mijatovic’s artistic practice.

Natalija Mijatovic received a BFA from the University of Montenegro, and an MFA in painting from the Pennsylvania Academy of The Fine Arts. Mijatovic has exhibited internationally in many solo and invitational exhibits: CUE Art Foundation in New York; Museum of American Art, Philadelphia; Moderne Kunst Aus Montenegro - Stephansdom, Vienna, Austria; Anthony Brunelli Fine Arts Gallery, Binghamton, U.S.A.; International Festival of Alternative Cultural Exchange (F.A.C.E.) - Belgrade and Novi Sad, Serbia; Cluj and Bucharest, Romania; Plovdiv and Sofia, Bulgaria; Sarajevo, Bosnia; Strasbourg, France; Eindhoven, The Netherlands; and Utopia Station at the 50th Venice Biennial, Italy. Mijatovic is a recipient of many international awards, including the Joan Mitchell Foundation MFA Grant, New York; Faculty Excellence Award at the Savannah College of Art and Design, GA; Center For Contemporary Art Award in Podgorica, Montenegro; and residencies such as Cité Internationale des Arts, Paris, France. She is currently a professor at the Department of Art and Design, Binghamton University, and chair of the Faculty Senate.