The work, produced specifically for the gallery space, illustrates how the accelerating pace of technological change impacts social interactions, economics, and personal behaviors. Large-scale collages and cutouts directly applied to the gallery walls point to these impacts, which include our winner-take-all economy, dis/advantaged ZIP codes, and corrosive disinformation exacerbated by digital interventions. From Uber to WeWork and Airbnb, new app-based employers warp traditional labor conditions, making it ever harder for workers to build autonomy and reliable working conditions. 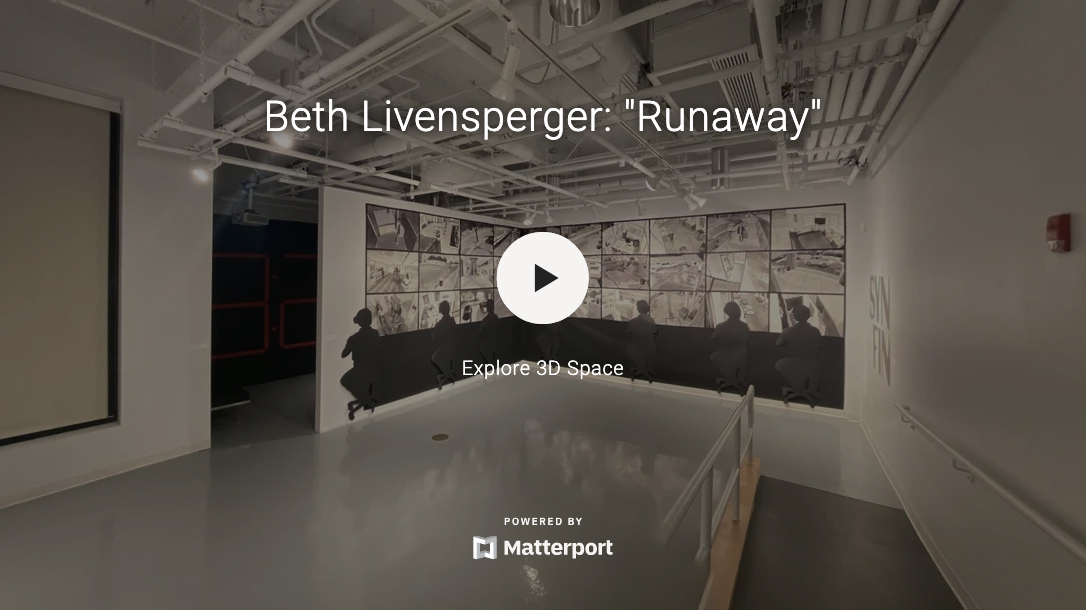 Runaway highlights surveillance technologies and their contribution to class inequality and environmental politics. While emerging technologies, data collection, and digital surveillance serve as means to corporate profit and control, the class gap and distribution of wealth grows wider. Livensperger comments, "Surveillance runs the gamut from facial recognition to online tracking and data extraction (as described by Shoshana Zuboff in The Age of Surveillance Capitalism: The Fight for a Human Future at the New Frontier of Power). The past two years have taught us that our interconnectivity and on-demand production also increase systemic fragility. While not denying the numerous positive impacts of current technology, this project highlights rising collective anxiety over its attendant downsides. This body of work reflects the difficulties and possibilities inherent in our relationship to structures of power."

The analog approach of cutting paper and vinyl, or painting with watercolors constructs a tangible environment for the mostly invisible nature of the digital world. The tension between the physicality of the medium and ideas about technology points to the temporality of the built environment versus the constant character of digital data, monitoring, and digital mining. Livensperger adds, "The act of painting functions as a different kind of recording process, one in which the homogenous eye of the digital camera is replaced by the choice-making, noticing eyes of the human. I worked on this project from March through August, making it the longest gestation and production of a piece I've dealt with. My ideas and formal strategies evolved during and due to the making process. Because the installation is a web of interconnected pieces, some of which function as one and some of which stand alone, I was able to more or less fluidly respond to revisions in my thought. Works in this show span the gamut from traditional watercolor to cut silhouettes of faux ostrich skin vinyl.”

Beth Livensperger has exhibited widely, at venues including at the American Academy of Art and Letters. She has been reviewed in Capitol New York and WNYC's Culture Datebook, among others. Livensperger received residency support from the Lower East Side Printshop (Keyholder Residency 2020-21), Queens Council on the Arts, The Saltonstall Foundation, Sam and Adele Golden Foundation, Virginia Center for Creative Arts, Vermont Studio Center, Chashama, and The Abrons Art Center, among others. Recent institutional support includes a grant from the Pollock-Krasner Foundation, among others. Livensperger obtained a BFA from The Cooper Union and an MFA in Painting and Printmaking from Yale University.

In addition to the feature exhibition, the Dowd Gallery will present a supporting program, in both virtual and in-person formats. Events will include an artist's talk, documentary screenings, a workshop, and lectures that place the artwork in a wider perspective. All programs are open to students and the public free of charge.

The artist will participate in a series of programs. On September 6, Beth Livensperger will conduct a virtual Artist's Talk titled Runaway, during which she will show images of her previous work and speak about her practice. Throughout the lecture, she will focus on issues of control, labor, and surveillance, and how these social tendencies play into various aspects of our interpersonal and collective relationships.

On September 28, the gallery will host two in-person events. Livensperger will lead an artist's workshop to instruct students and visitors on how to work with water-based mediums. Later in the afternoon, the gallery will host a program titled, In Conversation. Interdisciplinary artist Leeza Meksin, Assistant Professor of Art and Director of the Graduate Program in Studio Art at Cornell, will be in conversation with Beth Livensperger. They will discuss Livensperger's installation Runaway and the overlapping interests that translate into each of their work in different ways. Meksin's work ranges from painting to installation and public art and draws connections between bodies, architecture, and painting. Meksin, who has created works for institutions such as The Brooklyn Academy of Music and The deCordova Sculpture Park and Museum and has been featured in The New York Times and Hyperallergic (among many others), is based in New York.

Dr. Benjamin Wilson, Associate Professor and Chair of the Economics Department at SUNY Cortland, will place the exhibition in the context of the complicated structure of economic issues characterized by markers of control by distribution and access to various forms of currency. On September 21, his lecture, #Unis4all: Stop Trying to Find the Money, It’s Time to Create It, will describe the "Uni" as a micro monetary experiment that challenges dominant zero-sum crypto-currency and austerity narratives. Specifically, he highlights key parameters in the recently proposed E-cash and Public Banking Acts to envision universities as central actors in the development of a robust, inclusive, privacy-respecting public monetary system. With the digital currency revolution underway, the relevant question is no longer, who will find the money? It is, instead, who will create it?

The supporting program will continue with a virtual presentation by Dr. Karen Louise Grova Søilen, a faculty member at DIS-Study Abroad in Scandinavia, Denmark. On October 4, she will deliver a lecture, Atmospheres of Surveillance and Contemporary Art, to connect Livensperger's theme of surveillance to a global trend in the field of visual art. Søilen explains, "Since the turn of the twenty-first century, surveillance practices and technologies have become increasingly fluid and embedded in our lives, to the extent that monitoring entangles with and co-produces our imagination, feelings, dreads, and desires. In this presentation, I explore the idea that art is the realm where our affective experiences of surveillance most clearly come into sight."

The program will conclude with an in-person presentation by a special guest, filmmaker, and acclaimed documentarist, Shalini Kantayya, known for her award-winning film Coded Bias. She will visit the campus on October 11 and present Coded Bias: How Human Prejudice Creates Corrupt Technology, at the Brown Auditorium. She will ask questions such as: Is there such a thing as truly neutral technology? What happens to our rights when we let machines govern our liberties? She will cover how technologies are fundamentally designed with bias, specifically, the biases that reflect the assumptions (conscious or subconscious) of the people who program them. In this deeply researched and engaging talk, Kantayya explores the intersection of innovation and discrimination: disrupting the belief that A.I., science, and technology are inherently unbiased. She illuminates key questions about racial and gender bias in tech, data privacy, and human rights while revealing uncomfortable truths about how these systems evolve—and how they adversely impact marginalized communities, especially through law enforcement. With warmth, wisdom, and humor, Kantayya’s interactive talk reveals what the A.I. technologies shaping our collective future mean for civil rights and democracy. She will describe how we got here, how biased tech affects the way we live together, and what we can do to course-correct in this era of rapid technological advancement.

Shalini Kantayya is a Sundance Fellow and a TED Fellow. She was also a finalist for the ABC/Disney Directing Program. A William D. Fulbright Scholar, she has lectured at Princeton, Yale, Stanford, and USC, among others. She has received recognition from the Sundance Documentary Program, IFP Spotlight on Documentary, New York Women in Film and Television, and the Jerome Hill Centennial. Shalini Kantayya explores the intersection of technology and humanity, tackling questions of innovation, ethics, and bias. How should we deal with bias and security issues on our social media platforms? Kantayya's newest film TikTok, Boom investigates TikTok's algorithm and users to paint a picture of the world's most downloaded app and how we can wield it more safely and ethically. Her previous film Coded Bias reveals the deep-seated biases behind our computers, illuminating unasked questions about prejudice in tech—Vice called it "the most important film about AI you can watch today." (Source: Lavin Agency)

Leeza Meksin is an interdisciplinary artist working in painting, installation, textiles, public art, and multiples. She has created site-specific installations for The deCordova Sculpture Park and Museum, The Brooklyn Academy of Music, National Academy of Design, Columbia University Lenfest Center for the Arts, Utah Museum of Contemporary Art, The Kitchen, BRIC Media Arts, Regina Rex, and Brandeis University. In 2013 she cofounded Ortega y Gasset Projects (OyG), an artist-run gallery and curatorial collective in Brooklyn, which she continues to codirect. In 2021 Meksin received the NYFA/NYSCA Fellowship in Interdisciplinary Work; in 2015 she received the emerging artist grant from the Rema Hort Mann Foundation, and in 2019 was awarded an artist residency at The Chinati Foundation in Marfa, Texas.

Her work has been featured in Bomb, The New York Times, Hyperallergic, Chicago Tribune, and The Village Voice, among other publications. Prior to arriving at Cornell, Meksin taught in the visual arts program at Columbia University School of the Arts (2015–21), where for three years she was the Director of the Graduate program and the head of the New Genres concentration. Meksin received a joint B.A./M.A. in comparative literature from University of Chicago; a B.F.A. from School of the Art Institute of Chicago, and an M.F.A. from Yale University School of Art. (Source: Cornell University)

Karen Louise Grova Søilen is a faculty member at DIS-Study Abroad in Scandinavia. She has taught courses on the topic of surveillance from cultural and aesthetic perspectives since 2013 and received her Ph.D. on the topic Atmospheres of Surveillance in Contemporary Art (University of Copenhagen 2021). Her research interests center on surveillance perceived as bodily, emotional, and multisensory experiences, surveillance in contemporary art and culture, nonrepresentational and feminist methodologies, cultural theory, and the changing notions of the home through the affordances of smart technologies. She is the recipient of Surveillance Studies Network’s 2020 Early Career Researcher Award, and her work is published in Surveillance & Society, MAST: The Journal of Media Art Study and Theory, and NTIK: Nordic Journal of Information Science and Cultural Mediation.

Benjamin C. Wilson is a research scholar at the Global Institute for Sustainable Prosperity and an Associate Professor of Economics at the State University of New York at Cortland, where he teaches courses in microeconomics, comparative economic systems, urban economics, as well as a course on political economy of the Adirondacks class that takes place at the university’s camp on Raquette Lake. He received his Interdisciplinary Ph.D. in economics and social science research methodology from the University of Missouri-Kansas City. His research interests include environmental health, food systems, and modern monetary theory. His published work has appeared in the American Review of Political Economy, Forum for Social Economics, Intergenerational Responsibility in the 21st Century (Ed. Julia Puaschunder), Boundary2online, Public Seminar, and Monthly Review Online.