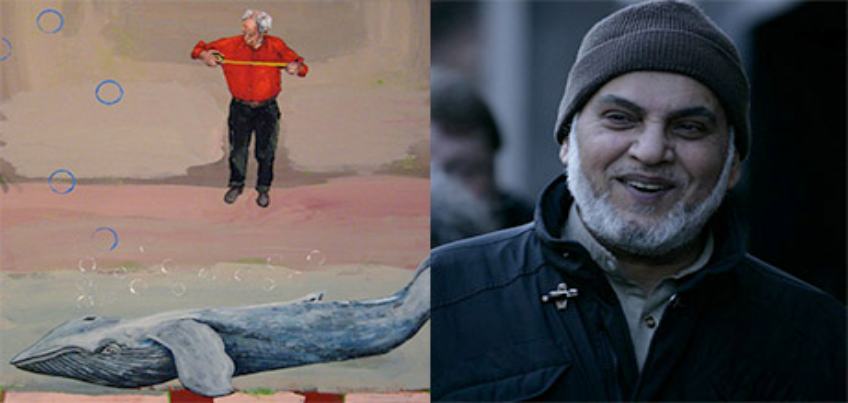 Twenty paintings by Lin Price and four bodies of photographic and interactive media projects by Simon Høgsberg are presented in this exhibition under the shared theme of human connection.  Though the artists work in different media and take contrasting approaches, both capture elements of the human condition through the use of the figure.  Price’s pieces are introspective and usually feature the same singular and quirky figure, whom the viewer feels compelled to contemplate.  The act of attempting to understand this figure’s world allows the viewer to find ways to empathize with him.  Høgsberg’s work, on the other hand, is inspired by the public sphere and employs images of multitudes of people.  He makes evident the unperceived bonds that tie his figures not only to one another but also to the viewer.

Price’s recurring figure, which she describes as “an Everyman,” engages in enigmatic activity and is often accompanied by prop-like objects or animals.  In the Working Men series, these elements reside on a simple backdrop of vibrant color fields void of any context.  In more recent works, such as The Departure and She Only Flies at Night, the background has evolved into a more painterly and dimensional space.  However, the setting still remains highly transferrable to the viewer’s own imagined narrative.

Price unveils a window into an interior dream world through which daily difficulties, desires and eccentricities are portrayed.  “I attempt to execute the paintings with empathy towards the human condition,” Price explains.  “Themes of work, isolation, stress, searching, anticipation, and caring emerge, that I believe many people in our times can identify with.”

The exhibition includes four small sections of Simon Høgsberg’s We’re All Gonna Die–One Hundred Meters of Existence, which features 178 figures photographed over 20 days on a railroad bridge in Berlin.  The figures are digitally compiled against a background of 100 meters of hazy, white sky.  The viewer can’t help but invent stories for these individuals, whose portrayals invoke the question, “What might you have in common with me?”

The Grocery Store Project, Høgsberg’s most recent undertaking, involved 159 days of photographing passersby in front of a grocery store in Copenhagen.  Patterns emerged from the staggering 100,00 snapshots he took in total, and he categorized the images by similarities, such as figures yawning or figures wearing glasses.  Individuals also reappeared in his viewfinder over time and sometimes shared the picture frame with the same stranger, unbeknownst to either party.  The final piece consists of 2,600 photographs organized into a chart resembling a giant family tree that makes these initially unnoticed links obvious.

Lin Price and Simon Høgsberg each bring to light in their work the common emotions and experiences of people, elucidating our connective existence.  Both artists invite the viewer to commune in some way with their figures, and perhaps through them, with other actual human beings.