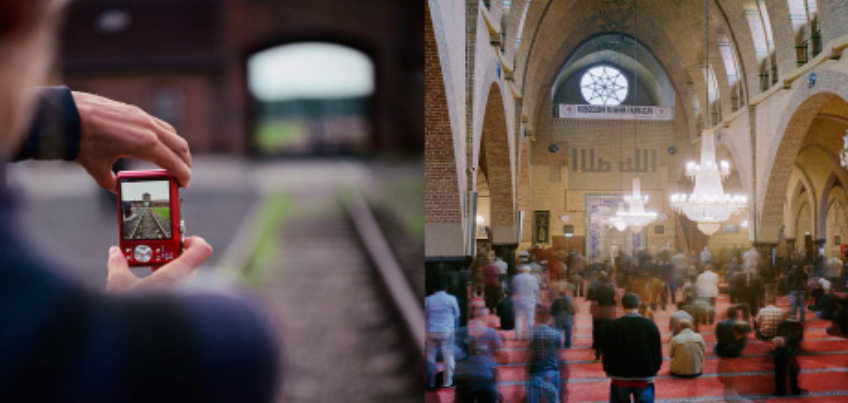 BEN ALTMAN
“My work is concerned with how we bear the burdens of history. Our contemporary world is constructed on the actions, mistakes, and sufferings of previous generations. We seek to honor, memorialize, and reconcile, but the past weighs on us - often individually, and always collectively. Many turning points of modern history were violent on extraordinary scales. These episodes diminish our humanity; to confront them through art-making is one way to push back against that loss. I create works where these burdens are examined and shared while bringing their weight to bear on our contemporary situation.
My projects take place both at home and at sites around the world. Home is both a safe and a contested, political space; my performances inject intractable histories into it, each illuminating the other. When I travel to sites of past mass violence and to memorials created to commemorate victims, my photographs explore the places themselves, the ways in which they convey their messages, and the response of visitors. Although these methods arise in part from my personal and family history as an immigrant to the United States and as the grandson of Jewish immigrants to the United Kingdom, I think most people can find their own connections to violent disruption. In my work, I hope that reverence is not only a statement about the past but also links to questions about our present and future.”
ROBERT KNIGHT
“The presence of structures used for ritual gatherings has been one of the universal features of human communities throughout history.  As centuries of migrations and wars have brought about an ebb and flow of people of various religious affiliations, sacred spaces have often been repurposed to reflect these shifting demographics despite what might seem to be vast differences in dogma and creed. For this reason, many of these gathering spaces are among the oldest extant buildings in our cities and towns today.
For the past five I have been exploring the role of religious spaces in our communities, both locally where I reside in central New York, as well as globally.  The project started with a documentary film examining immigration in central New York through four religious communities in the Utica area.  At the same time, I began making photographs and audio recordings of religious services, with a specific focus on spaces that represent a state of transition in some way.  In 2015, I continued making photographs of religious services during a sabbatical in Europe at the same time as I began making a series of images documenting exterior facades of mosques and synagogues in Berlin, where minority religions often operate at the margins of society.  Returning to the US, I produced an artist’s book comprised of images from Google Street View of every mosque from JFK airport to Syracuse, NY, representing a potential path that refugees and recent immigrants might take upon arrival in the US and the communities where they might settle.
While the US today is a country of rising secularism, it is hard to read the news without recognizing the importance of religion in to our contemporary geopolitical landscape.  My work attempts to address aspects of the conflict between secularism and religiosity and the feared displacement of the latter in contemporary society.”
Images
-Left: Ben Altman, Entrance, Auschwitz II-Birkenau Death Camp, Auschwitz-Birkenau State Memorial and Museum, Republic of Poland (detail), 2013, archival inkjet print, 22 x 27.5 in.
-Right: Robert Knight, Jummah Prayer, Fatih Mosque, Amsterdam, The Netherlands (detail), 2015, archival inkjet print, 40 x 32 in.