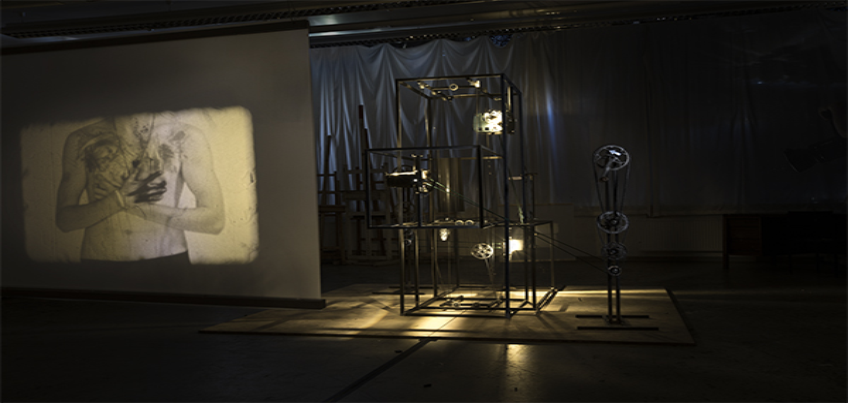 Selected artists present the creative processes of contemporary art alongside historical photographs and objects using sequential imagery in time and space. The exhibition showcases the demanding process of animation, installation and the conceptual image in motion. Their works explore a wide range of media and technical approaches that demonstrate high- and low-tech versions of the moving image. Contemporary works on display are juxtaposed with photographs by film pioneers Harold E. Edgerton and Eadweard J. Muybridge to provide historical context for the study of motion.

Eric Dyer features interactive wall piece Eadweard’s Menagerie based on work and legacy of Eadweard Muybridge, widely known as the Grandfather of Motion Pictures. Animated imagery reveals the hidden components of human and animal locomotion with his hundreds of sequential photographic studies. While his male subjects hammer anvils, box, and ride horses, several of his female nudes pour buckets of water over each other, kiss, and fall onto mattresses, landing with buttocks presented invitingly. One hundred twenty years before the pornographic Girls Gone Wild franchise launched, Muybridge directed nude women to perform exploitive actions in front of his array of cameras. In Eadweard’s Menagerie, Eric Dyer places a collection of these sequences into little virtual boxes under the gaze of a giant Muybridge, who posed nude for a number of his own studies. Dyer digitally smoothed the subjects’ motion, adding images to the sequences that never before existed, and making them feel more like they were shot today. The zoetrope-like artwork is spun by hand and comes to animated life under a synchronous strobe light.

Small wall object by Juan Fontanive Orinthology I uses machines that combine moving objects with moving images, which attempt to explore the unsaid of imagery related to movement, color, and sound. Fontanive explains.”The work is founded in the moving image, and influenced by its attributes; shutters, reels, black and white flickering. Responding to the lack of movement found in our current digital age, I'm interested in actual movement in relation to virtual. My work longs to free images, and tries to form a language to explore the vividness of living things.”  In addition, Fontanive’s animation Yodelayee offers original sound (single-channel video with sound, 1:30 min, loop). This project was printed with wood and metal type found in the letterpress at the Royal College of Art, London in 2004.

Laura Heit’s hand-drawn animated installation, Hypothetical Stars employs the artist's marks as interventions into 16mm footage taken from the NASA Apollo 12 mission. Being the mission after the first moon landing, it was notable for being the first to bring a color TV camera. And for the fact that, upon landing, the camera was pointed at the sun and inadvertently destroyed, immediately terminating the television broadcast. This piece asks the audience to consider a new view of that which we cannot see with the naked eye, where images sent back from the outer reaches are not seen as scientific truth but as deeply connected to our own desires and mirrors of our unconscious.

The work titled Projetorismus created by Ondrej Janek questions the mystery of the silver screen and how movement and illusion are sustained. The installation explores the materiality of the projected moving image and its inner-workings.

Instead of focusing on the movie content and its aesthetics, Janek’s objective is to emphasize the form and technological structure of the film media using an interactive structure. The installation unveils technical aspects of a projection and exposes mechanical elements to the audience. The moving image is activated by a physical interaction between a viewer and the installation. The work’s structure allows up to three participants to manually set in motion three vintage 16 mm projectors. Created dialog emulates historical motion picture methods such as kinetoscope or zoopraxiscope where the viewer is instrumental in the initiation of the animation process. The activated object transcends obsolete practices and brings them to a context of the contemporary sculpture.

Anna Vasof’s projection titled Self-portrait showed through video documentation is a new invention based on the essential idea of motion and time-based art. It is an object made out of simple everyday objects such as a metal bucket, an ordinary lamp, magnifiers, rope and paper cups. However, when the visitors move the rope up and down and the lamp starts pending, the object transforms into an audiovisual instrument, which animates a figure that interacts with its social environment. Her second piece in the exhibition is called Duel, which is an interactive wall-mounted work. By pulling its threads, the audience can decide in which direction the bullets will move. Right or Left? The project introduces a new technique based on Scanimation but it differs on the fact that the black lines can here move the frames in two directions. Duel is a static picture when no one touches it but when the threads with handles are pulled, it turns into a moving image and a metaphor for our participation in various socio-political conflicts.