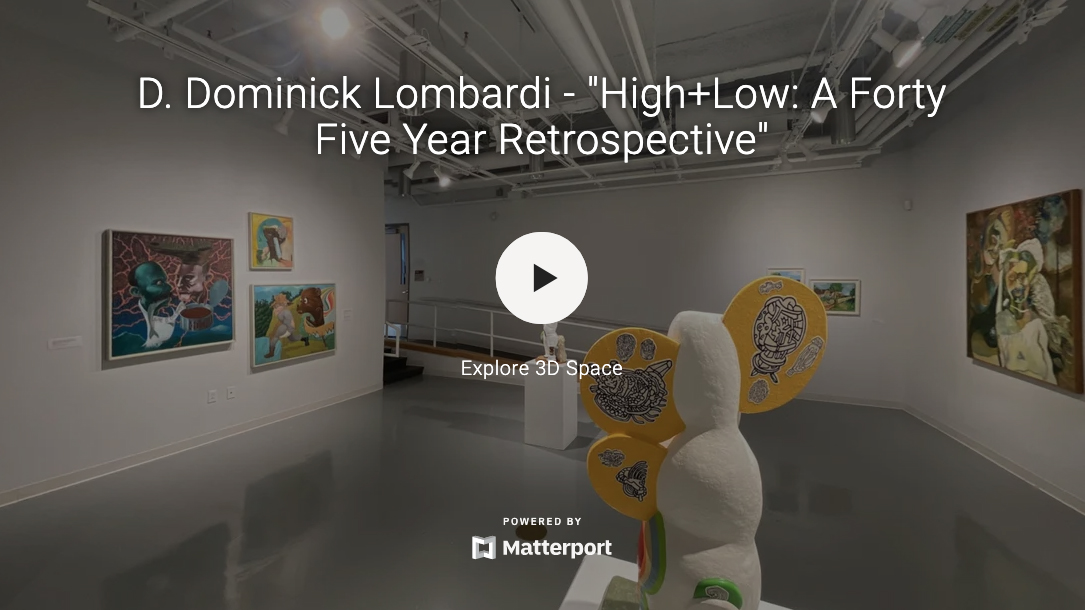 View a virtual tour of the exhibition

The eclectic collection reflects Lombardi's interest in a wide variety of materials, mediums, and concepts combined with experimentation. The distinct combination of highbrow and lowbrow art appears as a common denominator throughout the work that spans several decades. The evolution of Lombardi's practice began with the introduction of modern art, specifically when he first saw a reproduction of Picasso's Guernica (1939) at the age of 3 or 4, and continued with his introduction to the seductive world of Zap Comix in 1968.

The exhibition is comprised of series, such as the Cyborgs, a science-fiction-based series depicting half-human/half-machine beings, and East Village days, his earliest forays into sculpture and kinetic art, the repurposing of a multitude of found materials, and other inspired bodies of work. A pivotal point in his art career was the Post Apocalyptic Tattoo series, which was informed by his concerns about the environment and its impact on our future. After the downturn in the economy in 2008, he began the Street Urchin series that focused on the marginalized victims of that era. Most recently, he has explored the social issues of our time, referencing the roots of human morality.

The exposition as a whole offers a comparative view of opposing ideas and visual styles in the scope of fine art. Lombardi's work brushes against generalizations associated with relatively underappreciated artistic directions such as tattoo art, comics, and kitsch combined with tradition that elevates them with highly refined techniques, mastery of media, and concepts. The blend of ideas and processes, often combined with found or appropriated materials, creates a palpable tension resulting in more questions than answers. Visitors to the exhibit will have the opportunity not only to see a myriad of unique and thoughtful pieces but also to experience a physical representation of the timeline of Lombardi's life. The extensive collection premiered in 2019 at the Clara M. Eagle Gallery at Murray State University in Murray, Kentucky.

Curator T. Michael Martin writes about the artist: "Lombardi's masterful mix of high and low culture is as current as the day it was created, showing how little the aesthetics of human behavior have changed. In some ways, Lombardi's distortions are a more truthful look at society than our daily facade of polite policy and political correctness, especially in the way we prompt contention, as Lombardi offers a much-needed change and disruption through his unique sense of humor. Common throughout the works, Lombardi reveals source, influence, and process that allow the viewer a glimpse into the stages of his creations. They are, in essence, an open interpretation, veiled in playfulness, to put forth a more in-depth investigation of some very real concerns. His narrative is staged, directed, and then morphed through mostly unconventional combinations, as the resulting compositions encourage us to investigate beyond the surface of each work. A suggested glimpse into an apocalyptic breakdown of society, where we are allowed to emerge charged, reconfigured, and prepared to push forward, is a cunning execution where questions flow and commentary is made as the viewer reexamines the world revealed around them."

Without exception, the gallery organizes a supporting program alongside the exhibition to set the presented works in a wider context. A series of interdisciplinary, virtual, and in-person, programs open to the public offers a list of accomplished guest speakers and multi-media events addressing topics relevant to displayed artworks. The Artist's Talk delivered by D. Dominick Lombardi will address the evolution of his artistic practice, how each phase came about, what if anything inspired the work, and how he came to change media, genre, emphasis, and message. The visual presentation will also include life influences, artist inspiration, and how his personal history has constantly formed his art. In addition, several film screenings and virtual events are set to enhance the overall visual experience.

As a part of the programming, the Dowd Gallery invited an American journalist and contributing editor for Vanity Fair magazine and author of several books, Michael Shnayerson, to speak. A virtual Gallery Talk, Toward the Contemporary: Boom: Mad Money, Mega Dealers, and the Rise of Contemporary Art will focus on the intricacy and complexities inherently ingrained in the contemporary high art market, described from an unbiased journalist standpoint. Shnayerson presents an overview of the rise and the strength of the art market propelled by "behind-the-scene" personalities, motivated dealers, and elite auction houses, setting the course of the artwork value of blue-chip artists with recognizable names like Jeff Koons or Damian Hirst.

Errika Gerakiti, a Greece-based writer, critic, and contributor to art-centric online publications, such as Daily Art Magazine, will deliver a virtual Gallery Talk, The Crystallization of Lowbrow Art in the Works of D. Dominick Lombardi. Her presentation will center around a historical overview of the Lowbrow Art movement. She will focus on several key artists instrumental in the conception of the movement and its distinctive aesthetics. Gerakiti will set the art scene in a timeline describing the evolution to pop surrealism and connect the characteristics directly with the artist's work. The objective of the talk is to link the historical facts to Lombardi's visual practice and point to misconceptions perpetuated by the art establishment, including the high art market or academia. The emphasis of her presentation will be given to the innovative ideas, the unorthodox transformation of the art medium, and the depiction of reality still relevant to the contemporary art scene.

The last talk in the series will provide an additional historical context from a perspective of comics art for his sculptures, drawings, and paintings. Dr. Abram Fox will trace the trajectory of comics both as the visual combination of word and image and as a location for crafting exciting, engaging, and compelling stories. He will further touch on comics as a hybrid medium, drawing from the realms of word and image to create new systems of meaning through imagery and consider the aesthetic choices made by artists, who use the art form as a vehicle for new and novel creation of content. The visual presentation will demonstrate the constantly evolving 21st-century art form making its way into the high art market.

Abram Fox is the Honors College Coordinator at Towson University at Towson, Maryland. He oversees the Honors application and admissions processes, advises Honors sophomore students, and serves as an FYE advisor, manages assessment tracking procedures, and maintains the Honors website. He is also the curator for the Lieberman Collection, sits on the board of directors for Towson University Hillel, and occasionally teaches an HONR 370 special topics course, Comics: Art and Visual Culture. Prior to joining TU, Fox worked at the University of Maryland, College Park as Honors Humanities Program Coordinator. He earned Ph.D., M.A., and B.A. degrees in art history and archaeology from the University of Maryland, College Park, as well as a B.A. degree in history from that institution.

Errika Gerakiti is a prolific writer, contributing to several art-centric online publications, such as Daily Art Magazine or Top Content. She obtained a master's degree in Modern and Contemporary History and working towards becoming a curator. She writes articles about modern and contemporary art, fashion, and cinema. In her free time, she sculpts, paints miniatures, and reads books.

Michael Shnayerson has authored several books and over 75 Vanity Fair stories since 1986. In addition, two of his pieces for the magazine have been developed into films.