The Hoxie Gorge Nature Preserve, located in Cortlandville, N.Y., consists of 170 acres of abandoned farmland and woods. The property was purchased in 1965 by the State University of New York College at Cortland and has been used for field studies by many classes and for research by faculty and students.

The Hoxie Gorge property was the site of a dairy farm, operated by a series of families from the 1880s to the 1960s. Various plants have grown up around the former barn and house sites and in the fields and pastures. This natural sequence of changes in plant communities that occurs in an area over time is called plant succession. 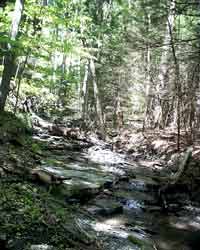 Primary succession begins in an area in which no plants previously existed. For example, lichens often grow on bare rocks and very gradually break the rock down into soil.

Secondary succession occurs where a plant community has been disrupted. A common example is when abandoned farmland is allowed to revert to the wild.

In deserted farm fields, the pioneer plants are often grasses, shrubs, weeds and tree saplings. Eventually, taller trees move in and alter the environment by creating moist and shaded conditions. Ultimately, a relatively stable climax community will be attained.

In our area, the beech, birch, maple and hemlock forest is the climax stage of plant succession. This trail goes through old fields, along the bank of a creek and into a climax forest.