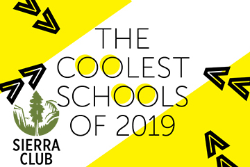 
The Sierra Club has yet again recognized SUNY Cortland’s commitment to being one of the nation’s most sustainable campus environments.

Cortland was listed No. 69 overall on the Sierra Club’s “Cool Schools 2019 Ranking.” The Sierra Club evaluates colleges based on sustainability-focused courses, ecofriendly cafeteria provisions and carbon-neutral land and energy policies. It looks at all four-year, degree-granting undergraduate colleges and universities as well as two-year community colleges in the U.S. and Canada.

Cortland was the only SUNY comprehensive college to land in the top 100. Other SUNY campuses ranked as “Cool Schools” include the College of Environmental Science and Forestry (No. 3), the University at Albany (No. 61) and the University at Buffalo (No. 67).

“This reinforces for us that we are doing a lot of good sustainability work at SUNY Cortland,” said Beth Klein, professor of childhood/early childhood education and the university’s sustainability coordinator. “I think it helps students who are looking for a college that has a sustainability ethic.”

It is the fourth consecutive year that Cortland made the list of 100 greenest campuses. It has risen in the Sierra Club’s Cool School rankings each of the last two years. The university placed at No. 84 in 2017 and was ranked No. 76 in 2018.

The Sierra Club uses data from the Association for the Advancement of Sustainability in Higher Education (AASHE) and the Sustainability Tracking, Assessment and Rating System (STARS) to measure six factors: curriculum, food, energy, waste, research and transportation. In particular, campus energy use, transportation and fossil fuel divestment are weighed more heavily as the Sierra Club believes those topics are most essential for addressing the climate crisis.

Earlier this year, SUNY Cortland received an elite gold designation from STARS, a distinction placed on only the top 2.7% of campuses in the nation.

Cortland was the first SUNY institution to develop a large-scale solar energy generation project of 3,600 panels through the New York Sun initiative. The campus has also moved to high-efficiency, low-emission individual boilers in campus buildings and has installed energy-saving LED lighting fixtures in Old Main that have offset many metric tons of carbon emissions.

The campus was the first in the SUNY system to meet 100 percent of its electrical needs through renewable sources and the first public college in New York to open a residence hall with a rare platinum rating from the United States Green Building Council. It was also the first in SUNY to earn membership in the Environmental Protection Agency’s Green Power Leadership club and was the first college in the nation to offer a master’s degree in sustainable energy systems.