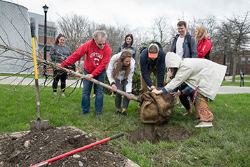 
SUNY Cortland has once again been recognized as one of the most sustainable campuses in the nation, earning an elite gold designation for being green that places it among the top 3 percent of all higher education institutions in the nation.

One of only four SUNY campuses to earn a gold rating, Cortland is the only SUNY university college to qualify. The other three were the SUNY College of Environmental Science and Forestry and SUNY’s university research centers in Buffalo and Albany.

Only 11 of the approximately 470 universities, colleges and trade schools in New York state met the gold standard and only 124 of the nearly 4,600 higher-education institutions in the United States — about 2.7 percent — qualified.

“We take great pride in this extraordinary achievement,” SUNY Cortland President Erik J. Bitterbaum said. “More than a decade ago, we were one of the first institutions to join the American College and University Presidents’ Climate Commitment. Since then we have been firmly dedicated to shrinking Cortland’s carbon footprint, reducing our waste stream and helping our students understand the impact that human activity has on our planet.”

STARS, a program of the Association for the Advancement of Sustainability in Higher Education (AASHE), is the most widely recognized framework in the world for publicly reporting comprehensive information related to a college or university’s sustainability performance. Scoring is done in five general areas: planning and administration; innovation and leadership; academics; engagement; and operations.

Cortland first achieved STARS gold in 2015, moving from a silver designation after becoming the first SUNY campus to fill all of its electrical needs with renewable energy, building the “greenest” campus residence hall in New York State and installing more than 3,600 solar panels.

Since then, the university has continued to meet its sustainability goals. Most recently, it has been a leader in a consortium of 21 SUNY and private campuses that seek to use their purchasing strength to lower renewable energy costs and encourage new, large-scale renewable energy projects in New York state.

Among SUNY Cortland’s many sustainability achievements, some of which helped the institution meet the new gold-rating requirements: