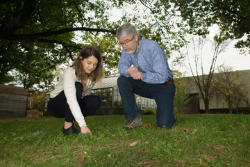 
When Anna Grygiel moved with her family to the United States from Poland in the sixth grade, she’d never had any training in English. Now, a decade later, it is one of two majors the SUNY Cortland junior is excelling in.

Her other focus is biology, a science that in many ways sits on the opposite end of the academic spectrum from English literature and language. Grygiel’s ability to balance the demands of those very different fields made her the ideal candidate for a SUNY Cortland research project on alien invaders to North America.

We are referring, of course, to earthworms.

This past summer, Grygiel benefitted from one of 10 undergraduate research fellowships from the College. The funding covered housing and living expenses for eight weeks so Grygiel could pursue a focused project on wriggling, underground migrants that married her love for science with her interest in the arts.

Under the guidance of Biological Sciences Professor Peter Ducey, she analyzed scientific literature on hypotheses of how non-native earthworms colonized North America. The goal was to determine if zoologist Gordon Enoch Gates, the most respected earthworm researcher of the 20th century, followed the scientific method in developing his theory that almost all earthworms arrived on this continent within the last 400 years.

That meant putting her skills with literature to work on decades of voluminous research and integrating it with her knowledge of science.

“I think about science in a different way now,” says Grygiel, who came to College with the goal of graduating to medical school and becoming a doctor afterwards. “Working at Dr. Ducey’s side showed me that this is the type of work I should be doing — it doesn’t matter if it’s research or medicine — because this is what I love.”

Grygiel’s success is even more impressive when you consider that she struggled academically when she first came to the United States and was forced to learn a new language while navigating a new culture.

“It was difficult when I first arrived in the country,” said Grygiel, who grew up in Staten Island, N.Y. “I wanted to do well, but I just couldn’t.”

She eventually found success with the encouragement of her teachers. In the same way that she was lifted by others when she first arrived in the United States, Grygiel has become the type of person who pays her success forward to classmates. When she noticed Shea Hall neighbors struggling with a first-year biology course, she immediately put together informal group study sessions to lift their spirits. Their test scores improved dramatically too.

“Before I knew it, we had 10 people coming into the study room and we all helped each other out,” Grygiel says. “It was this common effort and we all saw the benefits.

“Cortland is everything I hoped it would be and more,” she says. “I’ve met people and found opportunities that I know I wouldn’t have found anywhere else.”