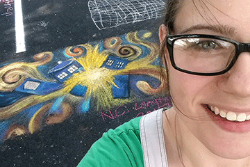 “Some students ask me if I’m 21 and I say ‘Yes,’” said Langton, who plans to walk in person at Commencement with family sharing the event virtually in May. She will accept a bachelor’s degree in childhood/early childhood education, birth through sixth grade, with a concentration in environmental studies.

“There’s no wrinkles and no gray,” Langton said, revealing how she accomplishes her transformation into the typical college student despite being 18 years beyond high school. “And when I’m at campus, I’m fully involved.”

But each day reminds her she’s not like other students.

She met Chad, the love of her life, when both were in the sixth grade.

“We started dating then. When we were high school seniors instead of having a graduation party, we had a wedding,” said Langton, of Castle Creek, N.Y., a small community near Binghamton.

“Our son came shortly thereafter, and we were both passionate about me staying home,” she said. “I had wanted to be an engineer and attending SUNY Delhi was my goal. But I put that off to raise a child. I don’t look back, because within a year he was diagnosed with a sensory disorder and autism.”

She decided she  could pause her education, but she wouldn’t get a second chance to be there for her children during their early years. The couple now has three children, Ryan, now 17,  Sam, 14, and Colleen, 12.

“It’s that closer attention, that little extra work that’s needed, especially with him being diagnosed with autism and with being able to have that person come in to work with him,” Langton said. “My staying home afforded us the ability to do that.”

Once her children were older and going to school,  Langton returned to her educational dream.

In 2017, she earned an associate in liberal sciences and certificate in early childhood from SUNY Broome before transferring to Cortland.

While at SUNY Broome, she presided over the Broome Educators of Children Association (BECA) Club and coordinated events for American Sign Language Club. Langston was inducted into Phi Theta Kappa, the international honor society for people attending community college, and graduated with high honors.

She credits Gregory Diller ’07, the SUNY Cortland coordinator of transition programs, who splits his time between the SUNY Broome and SUNY Cortland campuses, for helping maximize her credit transfer.

Since 2018, Langton has made the more distant trek to the Cortland campus and for the teaching experiences in Whitney Point School District. She does what she can to minimize the impact of a long daily commute on her home life.

“My first semester I purposely set all classes for Tuesday and Thursday from 8 or 9 o’clock in the morning until 9 o’clock at night. My husband would order takeout on those nights they knew I would be late. So, it could be leftovers or takeout for them.”

At SUNY Cortland, she has served as Student Government Association representative for the Non-traditional Student Organization and has been an active member of the SGA’s Diversity, Equity and Inclusion e-board. She participated in the university’s Beloved Community Narratives Project of campus posters and presentations highlighting Cortland’s rich diversity. In her poster, Langton shares her personal story of living with a hearing disability.

She is among the scheduled presenters at this year’s Student Conference on Diversity, Equity, Inclusion and Social Justice on Saturday, April 17.

At the special Commencement, Langton will proudly bear the honor cords for the national interdisciplinary honor society, Phi Kappa Phi, and the national honor society for non-traditional students, Alpha Sigma Lambda. She will also wear the colorful Kente stole, which weaves an African tradition into the graduation experience.

This summer, Langton hopes to begin a master’s degree in dual literacy at SUNY Cortland.

She credits her husband for making it all possible.

“He has been very supportive when I was looking after our family and now in every aspect of financial support and encouragement and love,” Langton said. “He did graduate in computer repair from Board of Cooperative Educational Services and now he does that on top of working at the family business.

“He knows I would be able to support him if he didn’t want to work sometime down the road. Because isn’t that what a marriage is about?”

Usually celebrated in the fall, the university will celebrate these students during Non-Traditional Students Week beginning Monday, April 12. Each day, special activities will take place virtually due to the COVID-19 pandemic.

Stories about  outstanding non-traditional students will be shared during the week.

The week features a host of activities both virtually and on campus. They include:

Nominations should include the student’s name, contact information, relationship to the student and comments about the non-traditional student. Comments will be listed on the certificate, unless otherwise noted. To nominate a fellow student, fill out the nomination form.