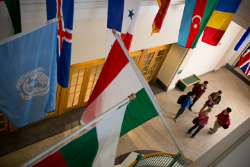 
Wars, conflicts and famine are forcing an immigration wave of historic proportions into Europe — one that hasn’t been seen since World War II, according to some scholars. The European Union does not have a comprehensive strategy in place to handle the massive influx of migrants and refugees. And Europe isn’t the only continent being forced to address this problem. From Asia to Australia to Central America, other parts of the world face pressing migration issues too.

It’s why SUNY Cortland’s Clark Center for International Education is offering a two-part series titled “Global Walls: The Migration and Refugee Crisis” throughout the 2015-16 academic year. The fall semester focuses on immigration in Europe and the Americas while the spring will consider Africa, Asia and Australia.

Remaining fall events include a panel discussion and lecture that are free and open to the public. Five remaining film screenings, limited to campus community members, also will be offered for educational purposes and tied a World First Learning Community course.

“It is important to empathize with these migrants and to understand where they are coming from, why and what they’re going through to reach the wealthier countries of North America, Europe and Asia,” said Alexandru Balas, the director of the Clark Center for International Education and an assistant professor of international studies at the College. “Immigration is probably going to play a major role in the U.S. presidential debates too.

“As well-informed, global citizens, we need to understand the politics of immigration and this is what the theme’s activities try to provide the campus community.”

Public events during the fall semester include:

Earlier this month, Sinan Ciddi, the director of the Institute for Turkish Studies at Georgetown University, offered a public lecture titled “Turkey & ISIS: A Reliable Ally?”

Roughly 500,000 migrants from Syria, Iraq, Eritrea and several other countries currently are seeking refuge in the European Union, in some instances drowning in their attempts to escape war and famine. Similar events took place in Asia earlier this summer along the coasts of Malaysia, Indonesia and Singapore with migrants coming from Bangladesh and Myanmar.

In Australia, migrant and refugee problems are subcontracted to neighboring countries Nauru and Papua New Guinea. Even in the Americas, migrants from Central American countries such as El Salvador and Honduras try to settle in the U.S. to avoid drug and gang-related conflicts.

The “Global Walls” series spring events will be announced early in the spring semester.