Mother of three is university senior 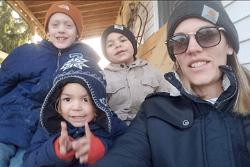 For the rest of the academic year, the senior physical education major attended her virtual classes while managing her active 9-, 6- and 3-year-old boys, who were usually being wrangled off-camera and out of screen sight by her parents or fiancée.

Most of the time, at least.

“My professors know all my kids very well,” Wells said.

This year, with students back in the classroom, life is much different for the transfer student from SUNY Broome. Every morning she pops her two oldest children on the school bus before dropping off her youngest at pre-school and driving half an hour up Route 81 from Whitney Point to Cortland.

“This fall has been crazy,” she said. “It’s actually been super nice being in person. I’ve had so much better relationships with other peers and that’s been nice to build on. But it’s definitely been harder for me, because I have three kids. My schedule is just so jam packed.”

That’s no surprise, given that Wells also serves as president of SUNY Cortland’s Non-Traditional Student Organization.

But she said that planning the Non-traditional Students Week (Nov. 15 to 19) of social activities for her estimated 250 non-traditional classmates on top of everything else has been worth it.

“It makes me have a connection to people who are going through similar struggles to mine,” Wells said. “Sometimes you feel like an oddball, so it’s nice to have that sense of community with others who can relate.”

Wells grew up in Whitney Point and earned an associate’s degree in criminal justice at SUNY Broome in 2008. Instead of a law enforcement career, however, she worked as an optician’s assistant in Norwich for several years before starting her family. At some point, becoming a police officer stopped sounding like such a good idea to her.

“I have a family to think of,” Wells said. “I didn’t want to put myself in a situation that was dangerous.

“Then I thought to myself, ‘Gosh, I would love to teach physical education.’ It literally popped into my head one day.”

Wells was encouraged to enroll by Virginia Wright, then the advisement coordinator in the Physical Education Department.

Knowing how demanding the activity classes would be for her, Wells first completed preparatory coursework in sport studies at SUNY Broome.

She finds herself surprised at the youthfulness and assertiveness of her physical education classmates, many of whom can boast of playing on a sports team.

“I admire them for being the confident people that they are and being able to do what they’re doing,” she said. “It’s really tough and I’m proud of all them, I really am.”

Wells feels her own future educational role is with a different kind of child.

“Athletic, I really wasn’t,” she said. “I was the kid who didn’t have much confidence in myself or my abilities. So if I could be the one who helps one of those kids gain that confidence, then good.”

SUNY Cortland acknowledged individuals including Wells from Monday, Nov. 15, through Friday, Nov. 19, during its celebration of Non-Traditional Students Week. Stories about outstanding non-traditional students were shared during the week, which also included a host of special activities, both on campus and virtually.