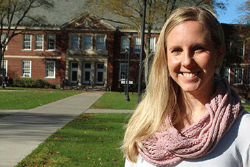 
In the decade between when she graduated from Cortland High School and now, SUNY Cortland senior and non-traditional student Liz Foster filled her time with college studies and a very big dose of elbow grease: as a restaurant waitstaff member, child care worker, nanny and more recently, as an administrative assistant.

It’s taken a lot of trial-and-error to find her perfect academic discipline, but her real-life exploration was well worth the trouble.

“Then I wanted to be a counselor,” she said of her early foray at college. “It’s changed. I want to work with children now or teenagers.”

She drifted between jobs until two years ago, when she took up the four-year track program for human services offered through SUNY Cortland’s Health Department. Along the way, she had discovered a love of children.

“Working with kids, that was one of my best jobs,” said Foster of her time with the former Small Hands Daycare Center in Homer, N.Y. “I was there for two years. Then, I was a nanny in Ithaca for a couple of years. I cared for babies who grew into toddlers split between two different homes: a nanny share. It was the best job I ever had and I miss those kids so much.”

Foster’s life as a first-generation college degree earner is a little bit different from that of some 300 other non-traditional students at SUNY Cortland, but in many ways the same.

Hard work was just normal for this human services major and future professional who spent her childhood on a farm and later in a Cortland home with her mother and three younger brothers. Off and on, she has waited on customers for the Central City Bar and Grill.

“Maybe because I’m the oldest I have some family responsibilities but nothing too major,” Foster said.

Over breaks, she now performs many tasks in the College’s Cortland Migrant Education Tutorial and Support Services Program office.

A Dean’s List and President’s List student since joining SUNY Cortland, Foster was inducted into three honor societies: Alpha Sigma Lambda, for non-traditional students, Tau Sigma, for transfer students, and the National Society of Leadership and Success, for building leadership among top students.

When she graduates in May, she will be the first in her family to complete a four-year college degree. She has encouraged her 18-year-old brother to try college.

“I’ve offered to take him around and show him some schools, it’s really exciting,” Foster said. “School’s not for everybody but if you want to better yourself, sometimes furthering your education is the way to go.”