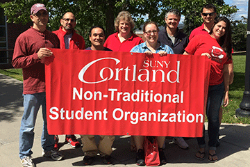 
SUNY Cortland has some 300 non-traditional students enrolled, and each has a unique story to tell.

Baghdad native Wasan Bahr Al Uloom honed her English language skills on the battlefields of the Iraq war before she emigrated to the U.S. 10 years ago.

Duty called Darcel Faulkner Carver, who took a leave of absence from SUNY Cortland after Fall 2001 to serve in the Marine Corps and returns to finish her degree.

Encouraging his 12-year-old daughter to do her best in school ultimately motivated Shannon Morgan to pick up the thread of his own college education.

Liz Foster has filled her time in the decade since high school with a variety of jobs, more recently as an administrative assistant.

Brandi Kelly, 35, has embraced her identity as a non-traditional student as a means of coping with the complexities of her pursuit, relatively late in life, of a bachelor’s degree.

The week also will feature a host of events and activities to take place in the Non-Traditional Students’ Lounge, in Cornish Hall, Room 1221. They include:

Also in celebration of SUNY Cortland’s non-traditional students, nominations are being accepted through Friday, Nov. 12, for the “Celebrate-a-Non-Trad” campaign. Nomination forms will be e-mailed to the campus community and are available electronically.

Nominations should include the student’s name, contact information, relationship to the student and comments about the non-traditional student. Comments will be listed on the certificate, unless otherwise noted.