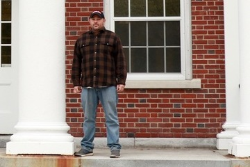 
Shannon Morgan had a conversation a few years ago with his daughter, Elizabeth, about the importance of education.

So he decided to do something about it.

Not long after that conversation, Morgan, 41, enrolled at Onondaga Community College. He transferred to SUNY Cortland after a year-and-a-half at OCC and is pursuing a bachelor’s degree in athletic training.

“The focus is still on my daughter,” Morgan said. “But it became about chasing my dream and that’s what I want her to do. If I want to talk to her about ‘where do you want to be and what do you want to do,’ I have to be the guy that does that as well.”

Morgan was an accomplished high school athlete at East Syracuse-Minoa in the mid-1990s, competing in cross country and track and field. He briefly ran collegiately at SUNY Delhi.

After leaving Delhi before graduation and spending nearly two decades working various jobs, Morgan has decided to focus on his goal of becoming an athletic trainer at the high school level. He wants to be a positive role model for teenage athletes.

“I believe that at some point God puts you in a position with the right set of skills and desires and interests and it comes together and that should be what you do,” he said. “It doesn’t matter so much on your pay. If it matters on your pay, you’ll never have enough.

“That’s the thing I try to instill in my daughter. ‘What is it that you’re passionate about and what is it that you want to do?’ If those things can come together, you’re going to be successful.”

Morgan has been appreciative of the flexibility of the faculty at SUNY Cortland. As he tries to juggle commuting from Syracuse, N.Y. and working and raising his daughter, the professors have allowed Morgan — and the other non-traditional students in the department — to complete coursework in a way that best suits his schedule.

“I came here because I could be close to my daughter because that’s super important to me,” he said. “I lucked out walking into one of the best athletic training and Kinesiology Departments in America. That was by chance and I’m so fortunate that is what happened. “