Sapphire, Author Behind “Precious,” to Speak on Campus 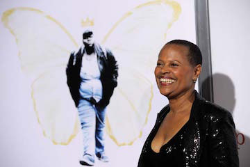 
A decade ago, the movie “Precious” broke new boundaries in Hollywood, winning critical acclaim and an Oscar with a gritty, gut-wrenching tale about an illiterate black teenager, pregnant and HIV-positive after being raped by her father.

The book on which the film was based, originally titled Push, created a similar stir when it was released in 1996, launching a former tutor for troubled high school students into the ranks of respected novelists, poets and chroniclers of realities that many would rather ignore.

Sapphire, the pen name of New York City-based Ramona Loften, wrote the story — and a follow-up novel, The Kid — by weaving together traumatic pieces of former students’ lives and her own horrific personal experiences.

She will read excerpts from her work, and discuss her writing process and inspiration, at SUNY Cortland’s Brockway Hall Jacobus Lounge on Thursday, April 4 at 5 p.m. Her talk is free and open to the public.

Sapphire is visiting Cortland as part of the English Department’s Distinguished Voices in Literature series, which brings poets, fiction writers, essayists and scholars to campus for readings and lectures.

“Sapphire brings marginalized voices to the forefront and I think that’s incredibly important now, given what’s going on around us,” said Heather Bartlett, an instructor in the College’s English and professional writing programs. “She’s an important voice. She is successful in her field and she is a writer but she also explores the issues of poverty and race and equality and brings attention to the kind of issues that are often set aside and made to be invisible.”

Bartlett is co-founder and co-director of the Distinguished Voices series with John Leffel, an assistant professor in the English Department.

In addition to her two bestselling novels, Sapphire has written two books of poetry, American Dreams and Black Wings and Blind Angels. Her work has been translated into 13 languages and has been adapted for stage in the United States and Europe. Her poetry, fiction and essays have appeared in The Black Scholar, The New York Times Magazine, The New York Times Book Review, The Teacher’s Voice, The New Yorker, Spin and Bomb. She has performed her work at the legendary Nuyorican Poet’s Café, Franklin Furnace, the Bowery Poetry Club, Literaturwerkstadt in Berlin and Apples & Snakes in London.

“Precious,” the film adaptation of the novel, received two Academy Awards: One for Best Screenplay, which Sapphire was involved with, and one for Best Supporting Actress, which went to Mo’nique for her portrayal of the main character’s abusive mother.

“I remember first reading Push, and it kind of changed my life, as a writer and a reader,” Bartlett said. “She is such an important and amazing figure.”

The Distinguished Voices in Literature series is made possible through the generous support of the President’s Office, the Haines Fund, the Provost’s Office, the Dean’s office, Campus Artist and Lectures Series, Cultural and Intellectual Climate Committee, ASC, Alumni Association, Cortland Writers Association and the English Department.