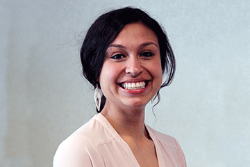 Nilsen, of Bohemia, N.Y., was presented a UUP College Scholarship Fund Undergraduate Award for $3,000 during the union’s 2019 Fall Delegate Assembly meeting Oct. 25 to 26 in Rye, N.Y.

An inclusive childhood education major and Spanish/English as a second language minor, she became only the fourth SUNY Cortland undergraduate to have received the award since the scholarship was founded in 1988.

“With contenders from all SUNY campuses, I can tell you that the Cortland delegation was thrilled beyond belief that one of our own students in the education major received this honor,” said Jaclyn Pittsley, UUP Cortland Chapter president. “It is a testimony to our university, to our teacher education program and to Alyson herself.”

Nilsen, who has a 3.98 grade point average, enrolled at the university in Fall 2015 and intends to graduate this month, after which she will pursue certifications in elementary, special education and ESL.

At Cortland, Nilsen has immersed herself in her teacher education program and in leadership roles on campus.

She completed her student teaching in the Syracuse City School District and hopes to work in an urban school district. Toward that end, Nilsen has studied under the Cortland’s Urban Recruitment of Educators (C.U.R.E.) scholarship program.

“I participated in C.U.R.E. programs such as ‘Building Men,’ where I developed a rapport with children from (Syracuse) city schools by joining them in activities and discussing college expectations,” Nilsen wrote in her scholarship application.

At Cortland, Nilsen has served as a resident assistant since Fall 2016 and has earned leadership awards as president of the university’s Hall Council.

She also met with a group of high-risk children weekly to play games, assist them with homework, and teach them positive social and coping skills as an assistant mentor with Compass Youth, a program for at-risk youngsters.

“In my junior year, I was fortunate to study abroad in Salamanca, Spain, where it increased my awareness of cultural differences and language barriers,” Nilsen noted. “To remedy this situation, I added English as a second language as a minor.”

For her endeavors well beyond the classroom, she was honored at Cortland with a Leadership in Civic Engagement Award. Nilsen also earned a Phi Beta Delta Award for teaching a Chinese Adult English class as an English as a second language intern.

“Alyson always volunteered to step up and take a leadership role, and helped inspire her fellow staff members to get involved and excited through words of encouragement, wisdom and her unfailing positive attitude,” wrote Haley Georgia, a SUNY Cortland residence hall director and UUP member, in joining two others who nominated Nilsen for the award. “She is truly an incredible human being.”

“As UUP has served as a platform for advocating for workers’ rights, working conditions and reform, I have tried to mimic those provisions at SUNY Cortland and within my schools,” Nilsen wrote. “All these experiences have shaped my vision to become the best teacher possible by working to resolve the inequalities and providing a safe environment for my students.”

The previous SUNY Cortland recipients of a UUP scholarship are Mark Jackson in 1995, Kelly Burdick '97, '01 in 2000 and Erica Frerking '11 in 2009. In 2011, Daniel Pitcher '10, M '11 became the first and to date only Cortland student to receive an award reserved for graduate students, the UUP College Scholarship Fund William E. Scheuerman Post Baccalaureate Scholarship.

As with all the UUP scholarships, the award honors individuals who have donated generously to the scholarship fund, and in this case the late Gertrude A. Butera, a SUNY Alfred associate professor of marketing who worked to promote the scholarship fund since its inception; the late Eugene P. Link, a SUNY Plattsburgh professor who dedicated his life to working families and to students who demonstrated an interest in the labor movement; and the late Robert Carter, a SUNY Oswego associate professor of history. Additional scholarships were made possible with money bequeathed by Carter’s late wife, Katherine. The graduate award was named after Scheuerman, the former UUP president from 1993 to 2007, who was instrumental in securing seed money for a scholarship for graduate and professional school students.