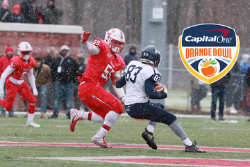 
SUNY Cortland senior linebacker Kyle Richard was selected as the nation’s 2018 Orange Bowl Courage Award recipient, becoming the first Division III honoree since the award was created in 2002 to annually recognize a college football player who has displayed bravery on or off the field.

Richard, who was shot twice while preventing a sexual assault, but worked his way back into Cortland’s starting lineup a few months later, has done both.

In the summer of 2017, Richard and friends, including University at Albany student Sulaiman Aina, were attending a party on Long Island when Richard was shot twice, once in each leg, after he and Aina interrupted a sexual assault. He returned to the football field that fall - missing just the first game of the season - and has become a passionate and outspoken advocate for both bystander intervention and preventing sexual assault.

“In many people’s eyes, our actions in defending that girl and standing up to the perpetrator made us heroes,” Richard said. “But in our eyes, it was just the right thing to do. What I didn’t know is that what we did that night was not so common. Most people do not act and are not active bystanders. This realization was the jumpstart I needed to launch my mission of promoting active bystanders and ending sexual and domestic violence. “

The Orange Bowl celebrated Richard at the game at Hard Rock Stadium in Miami Gardens, Fla. on Saturday, Dec. 29. A college football playoff semifinal, it pitted No. 1 Alabama against No. 4 Oklahoma and was televised nationally by ESPN.

Richard was the first Division III player nominated for the award since its inception. He was selected for the honor from among a group of 10 players from larger, nationally recognized schools ranging from the University of Oklahoma to Syracuse University.

He was also recognized at a coaches' luncheon in Miami on Friday, Dec. 28.

“Kyle personifies SUNY Cortland’s values; acting selflessly for others, persevering through hardship and using his difficult experience to help make the world a better place,” President Erik J. Bitterbaum said. “He showed courage not only by acting in the face of danger, but by dedicating his time off the field to raise awareness about a topic that many find difficult to discuss.”

Richard has received a number of awards and recognition from local and national organizations. He was presented with a Next Generation Award in March from Kristin’s Fund, an Oneida County charity that aims to end domestic violence through prevention, education and awareness campaigns. In April, Richard was honored by former Vice President Joe Biden with a Biden Courage Award for Bystander Intervention from It’s On Us and the Biden Foundation. NFL commissioner Roger Goodell sent a personal note of thanks to Richard after he earned the Biden Courage Award.

SUNY Chancellor Kristina Johnson selected Richard to speak and serve as student representative of the 600,000-student SUNY system at her inauguration in September. He delivered a presentation at Stevens Institute of Technology in Hoboken, N.J. later that month. Utica College invited Richard to speak at its Take Back the Night march and he has also been active on the SUNY Cortland campus, participating in the College’s Take Back the Night march and the Yards for Yeardley dating violence awareness event.

“Kyle Richard is a role model for us all,” said Johnson. “When suddenly confronted with a dangerous situation he had the courage to save a person from unspeakable harm - and he did so at risk to his own life. We are proud of Kyle, not only for his heroic efforts, but also for his willingness to share his story as a way to build awareness to stop sexual assault. My congratulations to him.”

Richard addressed students at SUNY Maritime on the topic of bystander intervention on Jan. 24, 2019.

ESPN featured Richard’s story of bravery and action in print and video, with the later airing on SportsCenter the morning of the 60th annual Cortaca Jug game against Ithaca College on Nov. 10. Both the story and video clip are available on ESPN.com.

“True heroes step up when they see somebody in trouble,” Richard said. “True heroes use their positions of leadership to advocate for doing the right thing, establish guidelines for consent and promote ways we can create a safer world.”

A native of Lakeview, N.Y., Richard, a kinesiology major, made a total of 71 tackles for the Red Dragons this past season, helping lead the team to a 7-3 record. He was named a team captain after his sophomore season - before the shooting - and finished his career with 171 tackles, 5.0 sacks and one intercepted pass returned for a touchdown. The Empire 8 Conference named Richard to its second team all-conference defense after the 2018 season.

“His story allows him a platform as spokesman and advocate for justice,” said head football coach Dan MacNeill ’79. “Combined with a tough resolve, humble perseverance and an extraordinary recovery, he continues to define his success story and journey as our cherished two-time captain and all-time teammate. This award is justly bestowed on the right young man, as his actions are a gift to all.”

The Orange Bowl Courage Award is presented by the Football Writers Association of America. A select group of writers vote on the winner each year. Twelve players, coaches and staff members were nominated for this year’s award. The requirement for nomination is the display of some sort of courageous act on or off the field, including overcoming an injury or physical handicap, preventing a disaster or living through a lifetime or hardships.