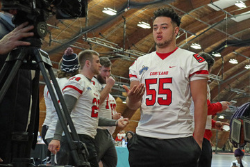 "Not everyone can be a hero like Kyle," Biden said at the event while urging other young men not to be silent bystanders. "But you have an obligation to holler ... to step up."

The annual award ceremony, hosted by It’s On Us and the Biden Foundation, celebrates student heroes who are working to stop sexual assault. Richard was presented with the Biden Courage Award for Bystander Intervention and received a thank you note from NFL commissioner Roger Goodell.

Richard and a friend interrupted a sexual assault in progress during a party on Long Island in the summer of 2017. Richard, a linebacker and captain of SUNY Cortland’s football team, pursued the assailant, who drew a gun and shot at Richard three times, hitting him once in each leg.

The bullets missed major arteries and bones by millimeters. Richard, through intensive physical therapy and training recovered in time for football season.

“Kyle is a remarkable young man whose courage and compassion is an inspiration to us all,” said President Erik J. Bitterbaum. “He exemplifies the type of active and selfless engagement with the world that we encourage in all our students. Needless to say, we are incredibly proud that he is part of the SUNY Cortland community.”

“Kyle Richard is a role model for us all,” said SUNY Chancellor Kristina M. Johnson. “When suddenly confronted with a dangerous situation he had the courage to save a person from unspeakable harm – and he did so at risk to his own life. We are proud of Kyle, not only for his heroic efforts, but also for his willingness to share his story as a way to build awareness to stop sexual assault. My congratulations to him.”

Since Richard interrupted the attack, he has become an outspoken advocate for the victims of sexual assault. In March, he was presented with a Next Generation Award from Kristin’s Fund, established in memory of Kristin Palumbo Longo, who was murdered by her husband in 2009 in Deerfield, N.Y. Richard was the guest speaker at Utica College’s Take Back the Night March in April and was involved with numerous Sexual Assault Awareness Month events on the SUNY Cortland campus.

“Kyle put into action what we have been educating people about regarding bystander intervention in the campus community,” said Title IX Coordinator Nan Pasquarello. “By stepping in to interrupt harm, he embodied the message of SUNY Cortland It’s On Us. Kyle stepped up to speak at the Take Back the Night March and participate in the dating violence awareness event Yards for Yeardley this month. He is a humble and genuine young man and I hope he will inspire others to do what they can to change our current culture.”

Vice President Biden founded It’s On Us in 2014 to fundamentally shift the way we think and talk about sexual assault and engage young people to stand up on their college campuses and in their communities. The first Courage Awards were hosted at the White House in 2016.

Richard has stressed that others don’t have to take a bullet to be active bystanders. Ideally, active bystanders work to prevent sexual assault situations from happening in the first place by respecting one another as human beings.

“I realize that people do want to hear my voice,” Richard said at Yards for Yeardley. “I have support from my whole football team. I have 100 guys supporting me through this, so that’s made it easy for me. But it’s still not an easy topic to talk about. It is a tough topic but we need somebody to talk about it, especially from a male perspective.”

When Richard shared his story on social media, it went viral. He has received more than 14,500 likes and 3,600 retweets on Twitter and has been contacted by people from all over the world who wanted to thank him for his courage and sacrifice.

Yet Richard wants to deflect the personal attention. He hopes that others follow his example and step up when they have an opportunity to act.

“I knew there would be attention and some sort of publicity,” Richard said. “But it’s not really about that. It’s about the messages I’ve received from people across the country.”