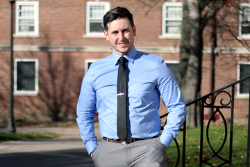 
Taylor Cookston was sure he was never going back to college.

He did enjoy Reserve Officer Training Corps (ROTC) activities, however, and decided to enlist in the U.S. Army, rising to the rank of sergeant. Cookston served in Germany, at Fort Drum and in Afghanistan during a tour in 2016.

His army career was a period of personal growth markedly different than his short stint in college. Cookston was a distinguished honor graduate of the basic leader course at Fort Drum — placing first in his class among approximately 200 candidates — and ultimately led a sniper section team.

Yet once his military service was complete in 2018, Cookston had a change of heart about college. He realized he’d be able to return to classes on the GI Bill and decided to return to school, but with a fresh vision of his future.

“Part of the reason I decided to go back to school was when I heard about Cortland’s reputation in the fitness industry,” he said. “The reputation drew me in to finish my degree.”

Cortland’s location was also a draw for Cookston and his girlfriend, Ruby Robinson, who studied art at SUNY Potsdam. She runs an arts events company in Cortland and works as a manager at Bright Leaf Vineyard in King Ferry, N.Y.

“We made a deal where we moved two hours south so I could go to school and she could still be close to her family,” Cookston said. “It’s worked out awesome. We own a home here in Cortland with our dog (Jake) and our cat (Elphi) and it’s going really well.”

His passion for winemaking, which he shares with his girlfriend, has helped him achieve some interesting connections at SUNY Cortland. Cookston works at the Student Life Center a few times a week and he’s bonded over the topic with former President James Clark, a regular at the gym.

Cookston aims to someday open his own gym and be his own boss. He’d also like to help personal trainers become better at their jobs by sharing his own expertise, which has grown since taking classes at Cortland.

“Mostly from the biggest guys in the gym, that’s where I had learned a lot,” he said. “A lot was somewhat accurate. Through Cortland, I realized that either they weren’t exactly right and could be better or I learned they were right on and here’s why. That’s fun for me because I enjoy learning processes and how things work together in systems.”

His future goals include creating a private, invite-only gym for elite athletes in body building and strength sports including power lifting, strongman and ninja warrior.

Cookston has enrolled in entrepreneurship classes through the university’s Economics Department to prepare him for the business world as well.

“My first time in college, I did not do well,” he said. “This time, it’s been a complete 180 and my attitude toward school has changed considerably. I view school now as my job. Being on my GI bill through the VA (Department of Veterans Affairs), it really is my job. With that in mind, I strive to do well because it’s my work.”

The College celebrated them all Oct. 28 to Nov. 1 with Non-Traditional Students Week. In addition to an array of activities offered through Advisement and Transition, one inspiring non-traditional student was introduced daily to the SUNY Cortland community.