Once homeless, non-trad overcomes the odds 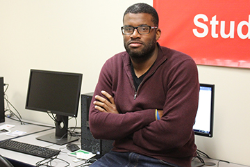 
James Tucker remembers what it felt like when his family was evicted from its apartment during his senior year of high school. He remembers wondering if he’d come home from school to working electricity and where he’d be living from month to month.

When he looks back on his teenage years, he remembers a range of emotions — mostly the feeling of constant worry and stress.

“It was rough,” said Tucker, who graduated from Saratoga Springs High School in 2009. “But I didn’t want what was happening to me to become an excuse.”

Now 29 years old, he’s a non-traditional student pursuing fitness development at SUNY Cortland. The campus is recognizing undergraduates like Tucker during Non-Traditional Students Week to highlight the unique skills and experiences they bring to the classroom.

SUNY Cortland defines non-traditional undergraduate students as those who are at least 24 years old or have had an interruption or delay in their education since high school. They also might have dependent children, regardless of their ages. Approximately 300 non-traditional students attend SUNY Cortland.

A member of the U.S. Army Reserve, Tucker said his best attribute is an ability to balance commitments to family, work and school. He has two children: a 5-year-old son and 3-year-old daughter. He works a full-time job at Arc of Schuyler, a non-profit organization in Watkins Glen, N.Y., that supports people with disabilities. He’s also a full-time student who commutes to campus four days each week from Elmira, N.Y., roughly 90 minutes away.

“People sometimes ask how I do it,” said Tucker, who aspires to be a strength and conditioning coach. “At some point, you just have to.”

His high school years taught him that much. Growing up in a single-parent family with three sisters was financially difficult. Tucker said his mother worked hard to support them, along with friends, relatives and his school district. Still, life was turbulent and moves were constant.

Tucker wanted to leave home after high school, so he attended Tompkins Cortland Community College and earned his associate’s degree in 2012. He had children, worked jobs in youth counseling and security services, then decided to follow through on a goal to join the military in 2017.

The biggest struggle was leaving his children for six months to attend basic training at Fort Leonard Wood in Missouri.

“I would much rather go through what I did in high school than have to go through that again,” said Tucker, who chose to attend SUNY Cortland largely for its convenient location and the strong reputation of the Kinesiology Department.

Balancing his studies with work and family obligations was a challenge at first, but Tucker said he has received support from outlets that include the Disability Resources Office.

“It’s all about finding a routine and working hard,” he said. “I’d rather try and fail than not try at all.”