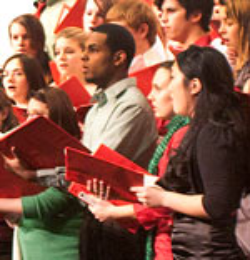 
“War and Peace” is the theme of the SUNY College-Community Orchestra concert set for Tuesday, Nov. 16, in the Dowd Fine Arts Theatre.

Directed by Ubaldo Valli of the Performing Arts Department, the concert will begin at 8 p.m. and is free and open to the public.

The program will feature three pieces by three composers written in three different centuries in response to war and peace. “Music for the Royal Fireworks” by G. F.  Handel was written to celebrate the end of the War of the Austrian Succession and the signing of the Treaty of Aix-la-Chapelle in 1748. “Marche Slav Op. 31” by P. I. Tchaikovsky, was written for a benefit concert in 1876 for Serbians wounded in the conflict with the Ottoman Empire that would become the Russo-Turkish War. “Memorial to Lidice,” (1943) by Bohulav Martinu, was written to memorialize the Czech village of Lidice that had been obliterated by the Nazis during WWII.