Kente Ceremony set for May 21 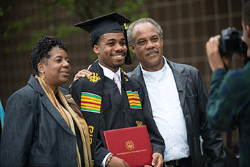 
Dana Smith had no prior knowedge of the annual Kente Ceremony when she began her work as the administrative assistant in SUNY Cortland’s Multicultural Life and Diversity Office in 2015.

Assigned the project then, she had been advised to expect about 30 students at the event in which graduating seniors don a woven, multicolored stole made to honor an ancient tradition of scholarship in Africa.

Six years later, 114 students will be recognized at this year’s ceremony on Friday, May 21.

The 6 p.m. ceremony will be virtual on Webex, due to public safety concerns with COVID-19. Registration is now open to students and the general public.

“If it wasn’t for the pandemic, we would usually have a candle ceremony, a band, and photographers taking photos throughout,” Smith said. “This year, being that it’s virtual, we have our guest speaker, Titilayo Morgan ’99 and a PowerPoint slide of each student with a photo that they have submitted.”

Morgan is the immediate past president of the SUNY Cortland Alumni Association board of directors, having worked dilligently toward diversity and inclusiveness in alumni activities and representation during her time in office from 2018 to 2020.

She earned a bachelor’s degree in psychology with a minor in sociology from SUNY Cortland in 1999. As a student, she took part in numerous clubs on campus including Black Student Union (BSU) and the ADOWE dance group.

Also during the ceremony, the Calvin Louis-Juste ’09 Memorial Award, NAACP Award and Kente Honorary Stole nomination winners will be announced.

The Calvin Louis-Juste ’09 Memorial Award represents one graduating senior that participates in Kente. The student who recieves the recognition must be an example of high academic achievement and committed to doing community service. The award signifies those who advocate for equity and inclusion on campus.

The NAACP award is for one graduating senior that demonstrated achievement in Social Justice and Education. This year’s honoree is active in promoting diversity, inclusion and social justice matters in support of the Black community and racial equity.

Faculty, staff or administrators at SUNY Cortland who demonstrate support for students of color and are involved in diversity and inclusion initiatives are nominated to receive an honorary Kente stole.

This year, three members of the campus faculty and staff will be receiving the honorary stoles. Honorees will be highlighted throughout the ceremony.

In 1994, SUNY Cortland’s Multicultural Life and Diversity began the Kente celebration for six graduating seniors and graduate students of color as they prepared to move on to the next phase of their lives.

The Kente stole is a rich, multicolored, hand-woven style of cloth that originated in Ghana, West Africa, and is revered throughout the African continent. It is customary to wear it at significant national ceremonies. The Kente stole’s colors and patterns convey vital details about the wearer and emphasize the significance of the ceremony.

In the United States, the Kente stole is a relatively new addition to graduation ceremonies. It symbolizes higher education’s link to the Africana World’s diverse cultures, traditions, and academic accomplishments. Seniors from all ethnic backgrounds proudly wear their Kente stoles at Commencement every spring in May.