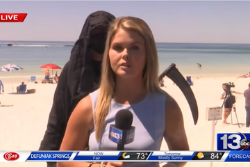 Faith Graham ’19, a multimedia journalist with WMBB-TV in Panama City, Florida, has just finished a live shot with Daniel Uhlfelder, a local lawyer who, because of the threat of spreading COVID-19, was protesting the reopening of the state’s beaches.

Sure, Uhlfelder was dressed as the grim reaper, but weird and silly news is just part of the job for Graham in a media market that ranks No. 150 in the nation.

“His costume didn’t really shock me,” she said. “There were a lot of people there watching the live interview, so I was more focused on not messing up in front of everybody than the fact that this guy was in costume right next to me. It’s a lawyer in a costume. This is Florida, what do I expect?”

A little after noon, Graham stopped for gas and decided to take a peek at her phone.

It was an avalanche of texts and Tweets and voicemails. Graham had gone viral.

A screenshot from the interview was making its way across social media. Graham, holding a News 13 microphone, is wrapping up the segment as the grim reaper stands menacingly behind her in front of a beautiful beach backdrop.

The irony. The juxtaposition. Heavy moral questions about how and when the nation should reopen. One frame of a local lunchtime broadcast so perfectly and artfully summed up the strange pandemic mindset of a nation. It was bound to spread rapidly across the internet.

And Graham, a recent SUNY Cortland communications studies major, was right in the middle of it all.

“I checked Twitter and saw that somebody had Tweeted it,” she said. “But I didn’t really look at the video. When I looked again, I saw that it had almost 1 million views and thousands of likes. I thought, ‘Oh my gosh, this is going viral.’”

News outlets around the world picked up the clip. Individual users started adding their own captions to the photo. Graham has started to receive messages from people across the globe.

“I heard from people in Australia and Bolivia that it was on their local news channels,” she said. “It was just crazy. The first few days I was just constantly getting messages from people from random countries saying, ‘I saw you here. Sending love!’ I had so many people tagging me in the memes and sending them to me.”

The shot itself came about through a series of coincidences.

Graham was working by herself, so she didn’t have a cameraperson to help direct. Uhlfelder was also running late, so Graham had little time to choreograph their movements. Social distancing protocols kept both out of the frame at once, at least until Uhlfelder hung back behind Graham as she threw it back to the anchor in the studio.

It all led to creating the perfect image for our times.

Graham isn’t bothered by the attention she’s received, either. She’s glad to bring a bit of levity to anyone struggling through the pandemic who could use a laugh.

“I think it’s so funny the way it’s been made into a meme because when do you ever see the grim reaper standing behind a news reporter?” she said. “There are so many different ways that people can edit it and make it about their own life. I just think it’s so funny.”

Graham’s journey into journalism was a bit of a winding road but SUNY Cortland helped her find her career path. She came to campus thinking of studying physical therapy. She dabbled in philosophy courses and business economics classes. Eventually, she found journalism courses through the Communication and Media Studies Department and realized her calling.

Hands-on experience with CSTV and internships with Fox Business Network in New York City and Spectrum News in Syracuse cemented her desire to go into broadcasting.

“I was very lucky that I was able to do those internships and get credit for them and put them into my schedule at Cortland,” said Graham, originally from Massapequa, N.Y. “I think there’s no better way to learn than by doing and being able to go into the field.

“In a field like journalism and communications, I think the only way you can really learn is by doing. Getting out there is what’s really going to teach you everything. If I didn’t have those internships on my resume, I think I’d probably still be looking for a job.”

Graham started applying for reporter jobs during March of her senior year. Knowing she was going to have to begin at a smaller market and work her way up through the industry — she hopes to someday return to New York — she started looking at stations in the South.

WMBB offered her a job before Commencement 2019, which gave her little time to study up on issues pertinent to viewers in the Florida Panhandle like hurricanes and wildfires.

“It was one of my biggest sources of anxiety,” she said. “You have to be an expert on the area you’re covering and I had never lived in Florida. I knew nothing about what goes on here and in a few weeks, I was expected to know everything to be the people’s source of local news. That was definitely intimidating. But after a few weeks, I felt like I had lived here so much longer.”

She certainly feels like a pro now, especially since “Reporting live in Miramar Beach, Faith Graham, News 13, Panhandle Strong,” has been heard around the world via social media.

“It’s pretty interesting. I don’t know if I’ll ever get used to seeing my face on random Twitter accounts but it’s funny. If people are laughing, especially during a time like this, I think it’s great.”