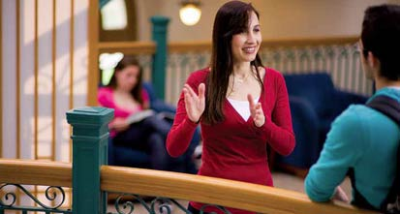 "People think learning a foreign language is learning the grammar and the vocabulary. You have to learn the culture where that language is spoken. You learn a completely different way of viewing the world."

Coming to the U.S. from her native Mexico was “life changing” for Professor Martinez, who teaches Spanish and English as a Second Language. “The information they had about me and I had about them was so limited,” she says. “Language became the way to understand each other.”

One of Professor Martinez’s earliest lessons in cultural awareness — or the lack thereof — came in high school in the early 1980s, when she left home in Mexico City, the world’s third largest city, to be an exchange student in Sandy Creek, N.Y., population 711.

Professor Martinez has been working to erase those limitations ever since. And she finds teaching — specifically, teaching foreign languages — to be a very effective eraser. “People think learning a foreign language is learning the grammar and the vocabulary,” she says. “But it’s so much more than that. You have to learn the culture where that language is spoken. Understanding another person requires you to understand their point of view and where they’re coming from. You learn a completely different way of viewing the world.”

Students in her classes learn the language so they can use it. Instead of drills or multiple-choice tests, there’s a lot of conversation. She gets to know students, so she can engage them in discussions about things that matter to them. If there’s a soccer player in her class, she’ll ask how the last game went. If someone’s into music, she’ll ask what they’ve been listening to lately.

And despite her focus on difference, the big message Professor Martinez wants to leave students with is this: “In the end, we’re all the same,” she says. “We’re all human. We all have a strong common ground.”