SUNY Cortland, the Institute for Civic Engagement and the Political Science Department offered a program that awarded $10,000 in grants in Fall 2011. This grant program, funded by the Sunshine Lady Foundation and titled The Learning by Giving Program, benefited undergraduate students interested in philanthropic work, assisted Cortland County not-for-profit organizations and, above all, contributed to the wider Cortland County community. The grant program is part of a political science course titled Philanthropy and Civic Engagement: Teaching Students How to Give.

Through this course, students created and developed a one-time grant program that distributed $10,000 in grants to Cortland County not-for-profit organizations. Final decisions on the grant awards were made by the students.

The following students received the Chancellor's Award for Student Excellence: 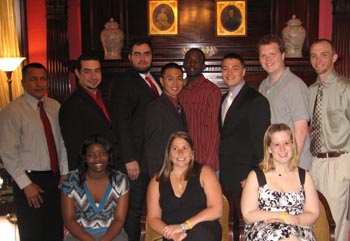 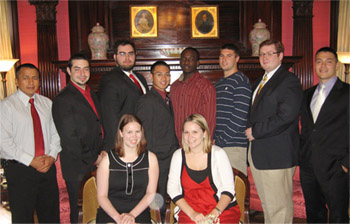 The Political Science Department hosted its first ever luncheon for graduating seniors at the palatial Parks Alumni House on Tompkins Street on May 6. In addition to recognizing the senior political science majors who will be graduating, the spring induction ceremony for Pi Sigma Alpha was held at the same time. The department also gave out two individual awards held over from the College's spring Honors Convocation: the Excellence in Law and Justice Award, given to Maria Schiavone; and the Excellence in Public Administration and Policy Award, given to Sirisack Siripanh. The event was co-sponsored by the Vice President for Institutional Advancement Office and by the Provost's Office.