A number of faculty from Arts and Sciences joined a contingent of faculty from SUNY Cortland visiting Capital Normal University in Beijing, China. The faculty were hosted by CNU as part of an effort to revitalize our long partnership with that university.

Professor Barbara Wisch, Art and Art History, lectured and worked at the University of Sydney, Australia, supported in part by a National Endowment for the Humanities grant.

The Department of Economics hosted Professor Ayla Ogus from Izmir University of Economics to discuss further developments in the dual diploma program.

Professor Jiguo Xia, Professor of History at Capital Normal University in Beijing, China was a visiting scholar hosted by the Department of History.

Professor Paul Van der Veur, Communications Studies, spent the Fall semester on a Fulbright Scholarship in Namibia. He produced a number of educational videos and a DVD on the AIDS epidemic in Africa. 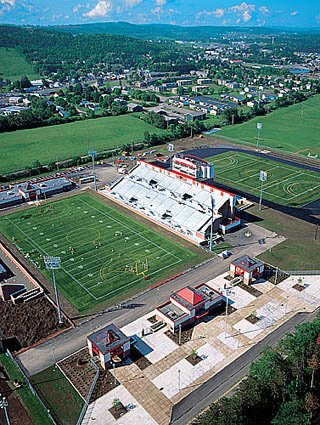 Professor Mohammed Ghouse Nasuruddin was a Fulbright Scholar in Residence and visiting artist from Malaysia, hosted by the Department of Performing Arts. He gave a number of performances and lectures during his stay.

Professor Wenying Li, Director of the Jingdezhen SanBao Ceramic Art Institute, China gave workshops on ceramics. Her visit was sponsored by the Department of Art and Art History.

Professor Jeremiah Donovan, Art and Art History, traveled to China as a Chancellor's Awardee for Internationalization to study Chinese art and culture. The award supported the development of a study abroad program for students.

The Department of Economics co-sponsored, with Izmir University of Economics, an International Conference on Economic and Human Resources. Dean Prus and Professor Haight traveled to Izmir in May to participate in the conference.

The International Studies program, coordinated by Dr. Sharon Steadman continues to grow. There are currently over 40 declared majors in the program.

With thanks to Dr. Henry Steck, Director of the James M. Clarke Center for International Education. His 2005 summary of international activities college-wide is the basis for this group of highlights:

Brian Rivest, Biological Sciences Department, led a group of students to the rain forests and coral reefs of Belize for a winter session course on marine biology.

Faculty in the Communication and Media Studies Department participated in the development of a number of international exchange projects. Thomas Mwanika, for instance, taught a course at Babes-Bolyai University in Romania. Caroline Kaltefleiter discussed institutional partnerships and faculty exchanges with the University of the Sunshine Coast and the Budapest School of Communication.

German Zarate, Economics Department, continued to conduct research in Mexico on the impact of reparations. He also traveled to a conference in Cuba this spring.

The Economics Department hosted two Russian economists from Moscow State University. They spent two weeks at SUNY Cortland, sponsored by World Bank grant, talking to faculty and gathering materials to improve the teaching of courses in Microeconomics and Industrial Organization.

Girish Bhat, History Department, was invited to lecture on Russian law and society at Moscow State University in October.

The Project for Eastern and Central Europe (PECE) undertook several projects during the year, in some cases working with other departments:

Hosted the faculty-in-residence of Professor Larissa Titarenko from Belarus, in the departments of sociology and history in fall 2001.

Cortland has been accepted by the American Councils on International Education as a Host Institution in the Councils’ Junior Faculty Development Program. JFDP brings junior faculty from the countries of the former Soviet Union to American universities for one academic year. The visiting faculty sit in on classes and undertake self directed studies toward the goal of improving their teaching when they return home. This year we applied for four fellows to be hosted by seven departments under the Junior Faculty Development Program.

Applied for and received a Fulbright Scholar-in-Residence for Spring 2003 and will host Professor Zdenka Kalnicka, from Ostrava University in the Czech Republic.

With the Performing Arts Department and the Philosophy Department, hosted a recital of piano music by Elena Letanová, Bratislava, Slovakia.

With a grant from the American Councils for International Education, PECE hosted a two week visit to Cortland of 27 Russian, Krygie, and Ukrainian school directors.

Tom Pasquarello, Political Science Department, taught a course “Economy and Ecology in Belize” and led students for a week of field study. The course was co-taught by Steve Broyles, Biological Sciences Department.

The Uniplanet maintained foreign desks in Mexico, Venezuela, Peru, Slovakia and Romania. It has also developed a close working relationship with the University of the Sunshine Coast, Australia.

Inaugurated an exchange program with the Osaka College of Foreign Languages and Business to bring Japanese students to Cortland. Two students from Osaka were in residence at SUNY Cortland this year.