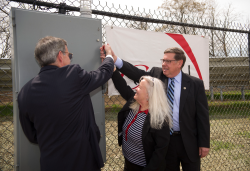 
SUNY Cortland symbolically threw the switch on more than 3,600 solar panels on May 9, highlighting the College’s commitment to becoming one of the greenest campuses in the nation.

The $3 million solar project is the first of its kind in the 64-campus SUNY system and could serve as a blueprint for other public colleges in New York state. It will be used as a renewable energy laboratory for students and produce 1.5 million kilowatt hours of clean solar electricity — enough to power 130 homes.

“This will generate 6 percent of all our electricity in the future,” said SUNY Cortland President Erik J. Bitterbaum, who joined state Sen. James L. Seward and an aide to Assembly Member Barbara Lifton in pulling a ceremonial switch next to one of the sprawling panel arrays. “We are very excited about this.”

The panel project, built and owned by private renewable energy company SolarCity through a New York State grant, is just the most recent SUNY Cortland “first” in the area of energy and environmental sustainability.

Bitterbaum was one of the original signatories of the American College and University President’s Climate Commitment and the College is the first, and only, SUNY institution welcomed into the federal Environmental Protection Agency’s Green Power Leadership Club. SUNY Cortland pioneered the creation of “Green Reps,” students hired to educate their peers about sustainability, and created a professional science master’s degree program in sustainable energy systems that is unique within SUNY.

Last year, the College became the first SUNY campus to fill all of its electrical needs with green energy, largely by committing to buy renewable energy credits. In March, SUNY Cortland’s newest residence hall became the first campus building in the SUNY system to achieve a platinum rating under the national Leadership in Energy and Environmental Design (LEED) certification system.

“I think the improvements and changes that are being made here on campus really do mirror the innovative thinking of those who are enrolled in classes here at SUNY Cortland,” said Seward, who recently attended the grand opening of the College’s state-of-the-art science building. “By becoming the very first SUNY campus to operate entirely on renewable electrical energy, it sets you apart as a trailblazing campus in all of the right ways.”

The College used an innovative approach toward building commercial-scale solar arrays on campus by taking advantage of a unique state initiative designed to increase the number of solar installations throughout New York. Last year, Gov. Andrew Cuomo named SUNY Cortland as one of 79 project sites for an award by NY-Sun, a solar energy program run by the New York State Energy and Research Development Authority.

Through the program, SolarCity built three installations with a combined total of 3,604 photovoltaic panels on campus. The project spreads 2,244 panels across a grassy area near the old west campus entrance to SUNY Cortland off Route 281, and added 680 panels each to the roofs of the Park Center Alumni Arena and the new Student Life Center, currently under construction.

Under a 20-year power purchasing agreement with the College, SolarCity will continue to own and operate the panels and SUNY Cortland will buy the power they produce at a set rate that is likely to save about $200,000 over the life of the deal. Although the College had hoped to get to 10 percent solar power by 2050, the scale of the huge solar project has allowed the campus to pull about 6 percent of its electricity from the sun already.

“In light of the most recent report on climate change, the National Climate Assessment, that once again warns us of the dire effects of global warming and the fact that we have to act now and we have to act big, what is happening here at SUNY Cortland makes us all very, very proud of you,” said Linda Smith ’82, Lifton’s chief of staff and a SUNY Cortland graduate. “It’s just another example of SUNY Cortland uniquely training the next generation to go out into the world. It gives us hope that we can face the challenges of global warming.”

The College has already incorporated the new solar installations into the studies of its sustainable energy systems students, according to Brice Smith, chair of SUNY Cortland’s Physics Department.

“Residential-scale systems are important and they are going to continue to expand, but systems of this size have their own unique aspects,” Smith said. “To be able to have a living, working system like this on campus will be an enormous help to our students. It will let them learn and really go into the world with a level of experience that very few others will be able to match.”

The solar installations have not only caught the attention of students, alumni and community residents, but also impressed job candidates brought to campus to fill a new sustainable energy teaching position, Smith said.

“Every single one of our candidates who came and looked at our campus were just amazed at how much we have been able to do, how much we were already doing, and this system was a big part of that,” Smith said. “On campus now we have solar systems at both the residential-scale size on Dragon Hall and at the commercial scale here. We have solar thermal, we have geothermal; the entire campus now is one giant laboratory for renewable energy, and that’s a real remarkable change that has happened in a very short period of time thanks to some very important leadership on campus.”

One key leader behind the push toward sustainability was not able to attend the May 9 ceremony. William Shaut, the vice president of finance and management who presided over the decision to pursue the solar project, commit to 100 percent renewable electricity and SUNY Cortland’s other green initiatives, recently passed away after a long illness. Friday’s ceremony was dedicated to his memory.

“Those who knew Bill will attest to his commitment to sustainability and energy conservation,” said Nasrin Parvizi, associate vice president for facilities management. “He was a financial officer, so he liked energy savings. But that was not why he was such a great advocate: It was because he believed it was the right thing to do.”

SUNY Cortland’s other sustainability initiatives include: