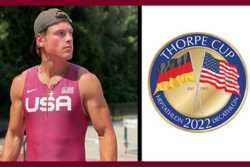 
Former SUNY Cortland NCAA track and field champion Jack Flood '18 finished in third place out of 14 competitors as a member of TEAM USA at the 2022 Thorpe Cup July 9-10 in Dallas, Texas.

The Thorpe Cup is an international decathlon (men) and heptathlon(women) competition between the USA and Germany. A total of 14 men and 13 women competed, with competitors earning points based on their performances. Germany was the team champion.

A Blue Point, N.Y., native, Flood won both NCAA Division III heptathlon (indoors) and decathlon (outdoors) titles during his senior track and field season in 2017. He set school and State University of New York Athletic Conference (SUNYAC) records in both events, scoring 5,247 points to win the heptathlon crown and scoring 7,021 points in the decathlon during the season (he tallied 6,998 points at nationals). Flood competed in the 2021 U.S. Olympic Trials, where he finished in ninth place with a score of 8,036 points, just two shy of his all-time best score.