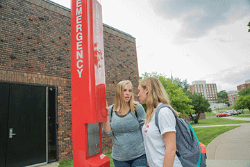 
There’s literally light at the end of the tunnel on the upper SUNY Cortland campus.

The top of College Hill is returning to a more normal look and feel as some work on the first phase of a campus-wide site lighting upgrade is completed, and deep, unsightly ditches are filled in and seeded with grass.

The project is systematically replacing aging lampposts that were first installed well before most current students were born and nearing the end of their useful lives. In their place, local contractors Billitier Electric of Cortland and excavating company Yeomans Enterprises of Homer, N.Y., are installing orderly lines of new outdoor lighting infrastructure along campus streets, parking lots and walkways.

Once the third, and final, phase of the campus-wide site lighting upgrade is finished by the start of the Fall 2022 semester, walking across campus at night will be a very different experience:

“We understand how intrusive this is to campus and hope that people will be understanding and know that it’s for the greater good,” said Dillon Young, lead construction manager with SUNY Cortland Facilities Planning, Design and Construction.

“Soon it will be restored and we will have a beautiful campus again,” he said. “Once we’re done, we won’t have to disturb the campus again for a very long time.”

The project “came to light” a couple years ago, Young said.

“It is meant to address a few different aspects on campus, including energy conservation and campus security. It was also the intent to replace the aging lighting infrastructure that we have here on campus.”

When completed, 467 exterior light fixtures and 27 emergency blue light phones/pedestals will be in place from the top of University Hill down to where Route 281 abuts the extreme southwest end of campus.

“Lighting has come a long way in the last few years,” Young said. “It’s almost hard to keep up with. This is designed to the most recent New York state energy guidelines.”

“Additionally, lighting is much more focused on the areas you are trying to light,” he said. “There is less light pollution, less light that reflects back up into the sky. There is more light going down where you need it.

“The birds and bats and neighbors will thank you,” Young added.

The campus blue light emergency phones will also be upgraded following a study by the University Police Department.

“The goal is for you to have — wherever you’re standing on campus — a visual of a nearby blue light phone,” Young said. “That’s to make people feel comfortable at night. With the addition of blue light phones, we’re also pulling the phones off existing buildings, so there will be a better line of sight.

“A lot of these blue light phone poles are being provided with cameras so our University Police Department is going to get a huge increase in area they can see across the campus,” he added. “We worked with the UPD to identify some dark areas across campus and get some lighting there.”

The three phases will proceed as follows:

“As soon as the new sections are up, we will be able to remove the old lighting,” Young said.

“The work is phased so we have to have the new infrastructure in and operational before we can start removing the old, just from a safety standpoint,” he said. “That’s why you are seeing the different types of lighting up now.”

When finished, the electrical lines between lamp posts will run at least 18 inches underground. That addresses problems that cropped up during unrelated campus construction due to the overly shallow existing outdoor electric lines.

SUNY Cortland captured funding for this major, multi-year project as a critical maintenance project, despite the fiscal austerity imposed on the campus by the pandemic.

“This is allocated through the State University Construction Fund (SUCF) for high priority critical maintenance projects,” said Juanita Larrabee ’02, the university’s Director of Facilities Planning, Design and Construction, noting that the Construction Fund selects initiatives for support based on set criteria.

“The highest priority is given to projects that address ‘life and safety concerns, core infrastructure in need of replacement that, if not addressed, could disrupt campus operations, and upgrade for buildings and infrastructure to meet current building codes and regulations, such as Americans with Disabilities Act (ADA),” she said.

SUNY Cortland was able to submit a strong request for funding because the uniform outdoor illumination upgrade was planned several years ago by C&S Companies in Syracuse, N.Y.

“We had the design complete and shovel ready, whereas other campuses weren’t as ready to use the funding,” said Young.