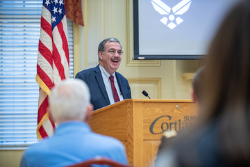 And he wants to make that clear.

The university’s 10th president who joined Cortland in 2003 was featured in a virtual event hosted by the Student Activities Board on Saturday, Nov. 14. The purpose of the event was to allow students, new and returning, to get to know their president better.

In the hour-long virtual meeting held over Webex, the president shared stories about himself, his family, gave advice, answered student questions and got to know the students on the call.

“There is nothing you can’t ask about me or about the college,” Bitterbaum said.

The president began the meeting sharing anecdotes of his personal life and how he had lived all around the world before turning 18.

“I was born in New York City but at the age of 2, my dad took a very unusual position,” Bitterbaum said. “He was just an accountant, but he decided that he had fought in World War II and found Europe fascinating and he wanted to get back there. The first place the U.S. government sent us was North Africa.”

From Tripoli, Libya, he and his family would go on to live in Germany, New York, New Jersey, Dallas, back to Germany in Munich and then back to the States to Louisville, Kentucky, Dallas again and finally ending up in Hawaii for his senior year of high school.

“The one thing that surprises people is that I learned to surf,” Bitterbaum said.

He was quick to share his experiences traveling the world with his family along with studying abroad his junior year while attending Occidental College, a private liberal arts college in Los Angeles, Calif., which is also where former President Barack Obama attended before transferring to Columbia University.

“I had the opportunity to spend my junior year abroad at the University of Sussex,” Bitterbaum said. “I would highly recommend if you could go abroad for a semester or a year, to do it.”

Though a world traveler, when asked where his favorite place to live has been, without hesitation Bitterbaum answered “Cortland.”

“We’ve lived in Cortland for the longest period in my life, going on almost 18 years,” Bitterbaum said. “Because the work is so interesting, I have to say Cortland, N.Y. The responsibility of being president has used every talent I have.”

For Bitterbaum and his wife, Ellen Howard Burton, their love for Cortland is deeper then attending Red Dragon athletic games, theater productions, lectures and hosting commencement.

“The reason I love Cortland so much is because I’ve been able to accomplish a lot here,” Bitterbaum said. “It’s not just me. It’s a whole group of people. If you take the time and show loyalty to a place, you can really change an institution.”

In the past 18 years, Bitterbaum has guided nearly $300 million in new construction and renovation on campus, including a state-of-the-art science complex, the creation of New York’s “greenest” residence hall and the most unique and comprehensive student recreational facility in the 64-campus SUNY system.

Additionally, he has been committed to the diversification of the campus community. When he began in 2003, only about four percent of the student population were students of color. Now, that number ranges anywhere from 24 to 27 percent.

In wrapping up the evening, Bitterbaum and Burton shared with students a message of hope for a better spring semester and the importance of finishing strong.

“You are all very special to us. We want you all to do well and flourish,” Bitterbaum said. “When the chance comes, stop me and say ‘hi’ and visit the office before you graduate. We can be socially distant and wear our masks. I have an open office.”