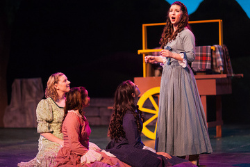 
The Performing Arts Department’s 2017-18 season of plays and musicals has a distinct theme.

Each of the four shows explores the perspective of women in different eras of history.

The schedule includes two English plays — “Kindertransport” and “Top Girls” — as well as the familiar musicals “Little Women” and “9 to 5.” Each show is set in a different location, from Adolf Hitler’s European Holocaust to Margaret Thatcher’s England and from the American Civil War of the 1860s to the American corporate world of the 1980s. Yet they all share common themes that remain relevant today.

“My belief about theatre is that it is a tool to discuss these kind of subjects,” Deena Conley, associate professor and department chair said. “We have to talk about those things or we’re just going to keep repeating them.”

“Kindertransport,” which runs Oct. 5 to Oct. 8 in the Dowd Fine Arts Center, Lab Theatre, was written by Diane Samuels in 1993. Between 1938 and 1939, the British government evacuated approximately 10,000 Jewish children from continental Europe and gave them a new home in England. The play tells a fictionalized story of 9-year-old Eva, who was separated from her parents in Hamburg, Germany and taken in by a family in Manchester.

Davis had not heard of “Kindertransport” before this season was announced. She’s been empowered by working on a play that was written by a woman and has five of its six roles played by females.

“Dr. Conley always says that women, if they want roles written for them, have to write them,” Davis said. “They’re hard to find, and I wish it could change, but the only way it’s going to change is if women write more for women.”

“Little Women” will be performed from Dec. 1 to Dec. 10 in the Dowd Fine Arts Center Theatre. Based on the 1869 novel by Louisa May Alcott, “Little Women” tells the story of the four March sisters as they grow from adolescents to adults in a family struggling with financial troubles in the years after the Civil War.

Kevin Halpin, associate professor, will direct “Little Women.” This version of the musical deviates slightly from Alcott’s book and Broadway’s “Little Women,” as it places an emphasis on all four March sisters and their mother, Marmee, rather than focus extensively on the plucky Jo March.

“People who know the book will really love and enjoy this version,” Halpin said. “For people who are hearing this story for the first time, I think they’ll be really drawn in and touched and moved as well.”

Throughout the musical, the March sisters struggle to find their paths to adulthood. Although it’s been 150 years since “Little Women” debuted in print, it portrays avenues many young women today still travel.

“Top Girls” was written by English playwright Caryl Churchill in 1982 and will be presented from Feb. 22 to Feb. 25 in the Lab Theatre. It explores the role of women in the workplace. The protagonist, Marlene, has recently earned a promotion at the employment agency where she works. The play explores the personal and professional cost of her success.

The play, told in non-linear format, also includes a dinner scene where Marlene eats with various fictional characters and historic female figures who have achieved some sense of success or power.

Mark Reynolds will direct “Top Girls.” He recalled it from his days as a student at the University at Buffalo and it has resonated with him ever since.

“It’s one of those plays where you don’t think it’s going to relate to you at all but the deeper you dig into it, you’re like, “Holy Cow,” he said. “The beautiful thing about this play is that it’s universal to everyone. It really says so much about the state of the world.”

“Top Girls” features an all-female cast. Reynolds encourages all members of the campus and community to come see the play, as its themes are not restricted to women’s issues. He also hopes that the two fall semester productions will cast “Top Girls” in a new light in the minds of his students.

“It’s going to be interesting to listen to their reactions from what they learn in “Kindertransport” and how that translates itself into “Little Women,” Reynolds said. “I’m really excited just to hear their reactions of how they see these stories relating to each other.”

“9 to 5” is a musical version of the 1980 film of the same name starring Jane Fonda, Dolly Parton and Lilly Tomlin. It runs from April 13 to April 22 in the Dowd Fine Arts Center Theatre. The workplace comedy features three main characters as they rebel against the sexist and hypocritical office politics of their male bosses.

Jena Nicols Curtis, associate professor of health and coordinator of the College’s Women’s, Gender and Sexuality Studies Department, remembers seeing the film “9 to 5” shortly after its release. The misogyny of the male characters seemed comic 37 years ago, but the film has a much different feel for students who see it for the first time today.

Curtis will encourage her students to see SUNY Cortland’s performance and she plans to use it as a topic of classroom conversation.

“One of the things that I’m really hopeful for as the coordinator of Women’s Gender and Sexuality Studies is to make these connections and these intersections,” Curtis said. “I want our students and our faculty and staff who are seeing that play to think, “Oh my gosh, I can’t believe we used to treat women this way.” I want them to wonder, 30 years from now, what group are we going to be looking at and saying, “I can’t believe we ever treated people like that.”

Liz Davis can’t wait for the season to get underway. She’s been reading and thinking about each of these four performances since the schedule was released late in the spring semester and hopes to share the messages of female empowerment that lie within each.

“As I did more research on each of the plays, I appreciated that it’s a season for women about women,” Davis said. “A lot of traditional, older shows, you have the male lead and you follow his journey. The female isn’t secondary, but she’s more the wife or the love interest or on that sort of plane. In all of these shows you see very strong-headed women and they’re on their path and you get to follow their story.”

Tickets to all shows are $19 for adults, $16 for faculty, staff and seniors and $9 for SUNY Cortland students. To view a full schedule of shows and to purchase tickets, visit Cortland.edu/boxoffice.